The Summer Big Five Search at Baseline and Meridian

I woke up today after sleeping through my alarm clock for 45 minutes.  In that amount of time, had I had woken up in time, I would've been able to be three fourths of the way to most of my destinations in Maricopa County.  Waking up late automatically clinched my decision to go somewhere close by.  After recent reports on the Arizona Listserv that were first started by Caleb Strand regarding a few outstanding sightings at the nearby Baseline and Meridian Wildlife Area, I have been wanting to go there.  The area is close to me (25 minutes away), and is somewhere I have birded a lot in the past.  There have been a few great discoveries here in the past, such as Philadelphia Vireo and Black-throated Blue Warbler.  I have found Broad-billed Hummingbird here, and even a Cave Swallow once.  The location is a well known spot in Arizona for viewing Clapper Rails, which is one of the birds that Caleb reported.  While I think of most places in the Phoenix area to be mainly good in spring, fall, and winter, it usually is the exact opposite for the Baseline and Meridian Wildlife Area.  One of the best times to bird this area falls within the summertime!  There are several birds that are easily viewed here, and some that are present and difficult to find.  The Baseline and Meridian Wildlife Area was once dominated by 95% of it's tree makeup to be tamarisk.  A recent project removed the tamarisk, and there are open areas of pretty much nothing.  There are stands of willow and cottonwood trees along the Salt River here, but they are pretty sparse.  However, the project is also planting native vegetation.  Years from now, this place will by dynamite I'm sure.  And it is Tres Rios's next door neighbor, so there will be outstanding birding opportunities in years to come.  As for today, I had 5 targets that I was after.  I thought of it as the Summer Big Five of the Baseline and Meridian Wildlife Area.  And the Summer Big Five for Baseline and Meridian are:  Least Bittern, Clapper Rail, Great Horned Owl, Barn Owl, and Yellow-billed Cuckoo.

At the Baseline and Meridian Wildlife Area, there has always been a reliable location for both Great Horned and Barn Owls.  This is especially the case in late spring and summer, when both species nest.  I walked underneath a big bridge that goes over the Wildlife Area only to look up and see one of my targets looking up down on me from a convenient perch on the bridge. 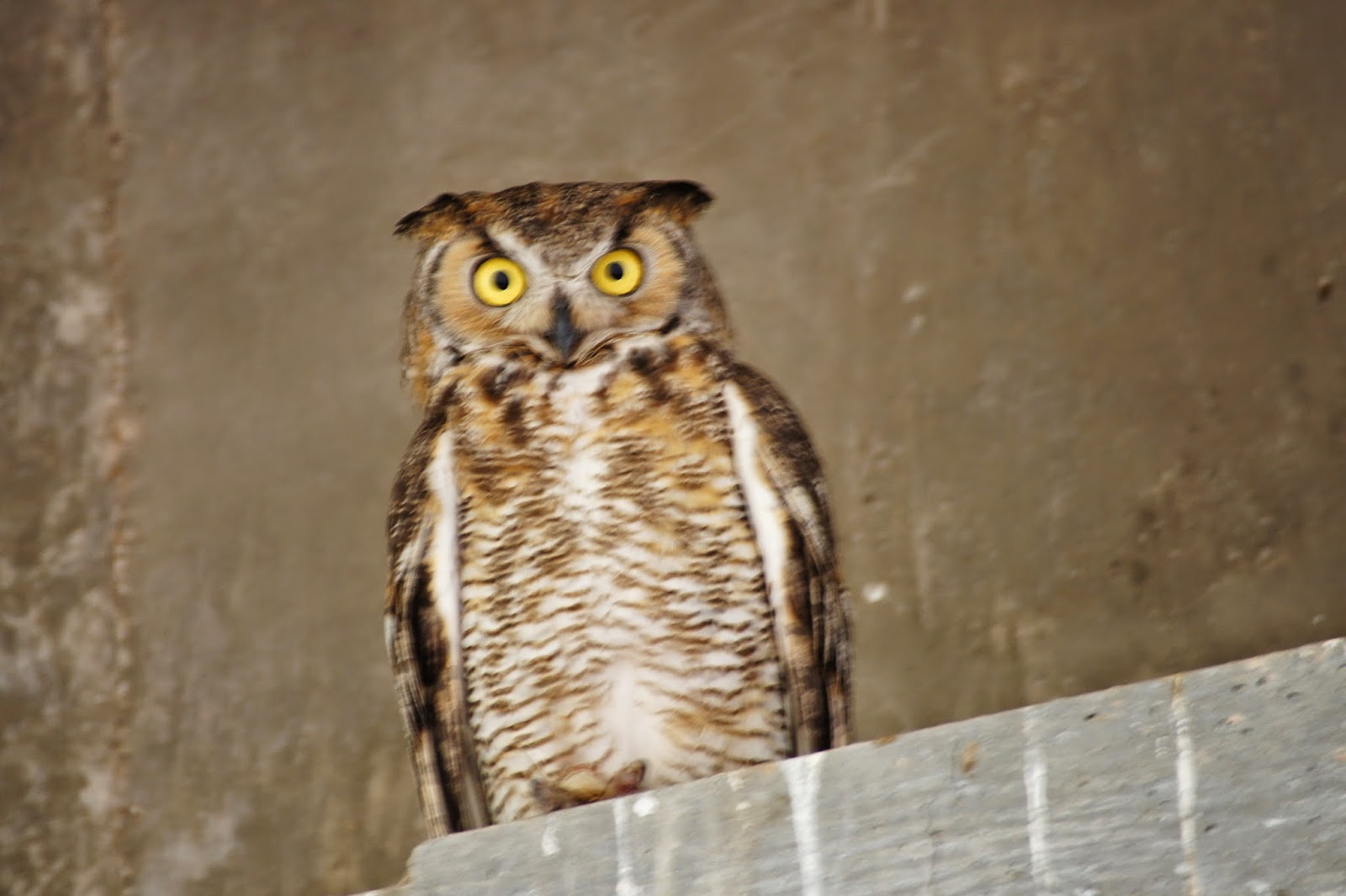 While the lighting was dark under the bridge, I didn't have ample time to get a good shot off of this Great Horned Owl before it took off to a stand of cottonwood trees.  I then looked across the way to see the Owl's kid perched on the adjacent section of the long bridge.  And like most human kids, owls aren't much different.  They are curious and unafraid. 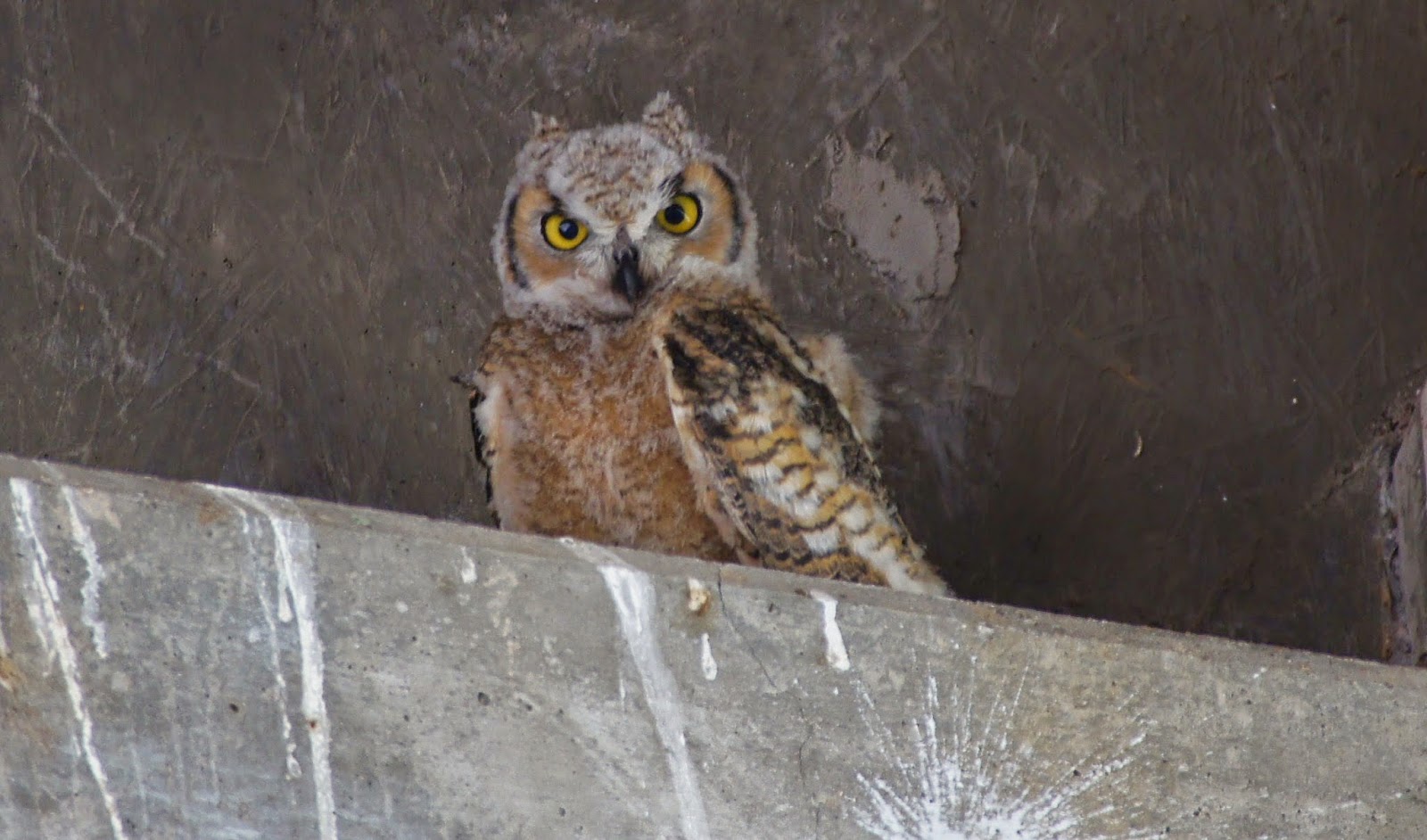 I then decided to play, "Go Find The Owl".  For a short while, I left the underside of the bridge and explored the cottonwood stands to refind the adult Great Horned Owl.  While I searched, a Black-bellied Whistling-Duck flew by and a Blue Grosbeak sat on top of a tree and sang away.  As I approached the stand, I found the Great Horned after a careful scan.  Although they are very big owls, they sure do camouflage well! 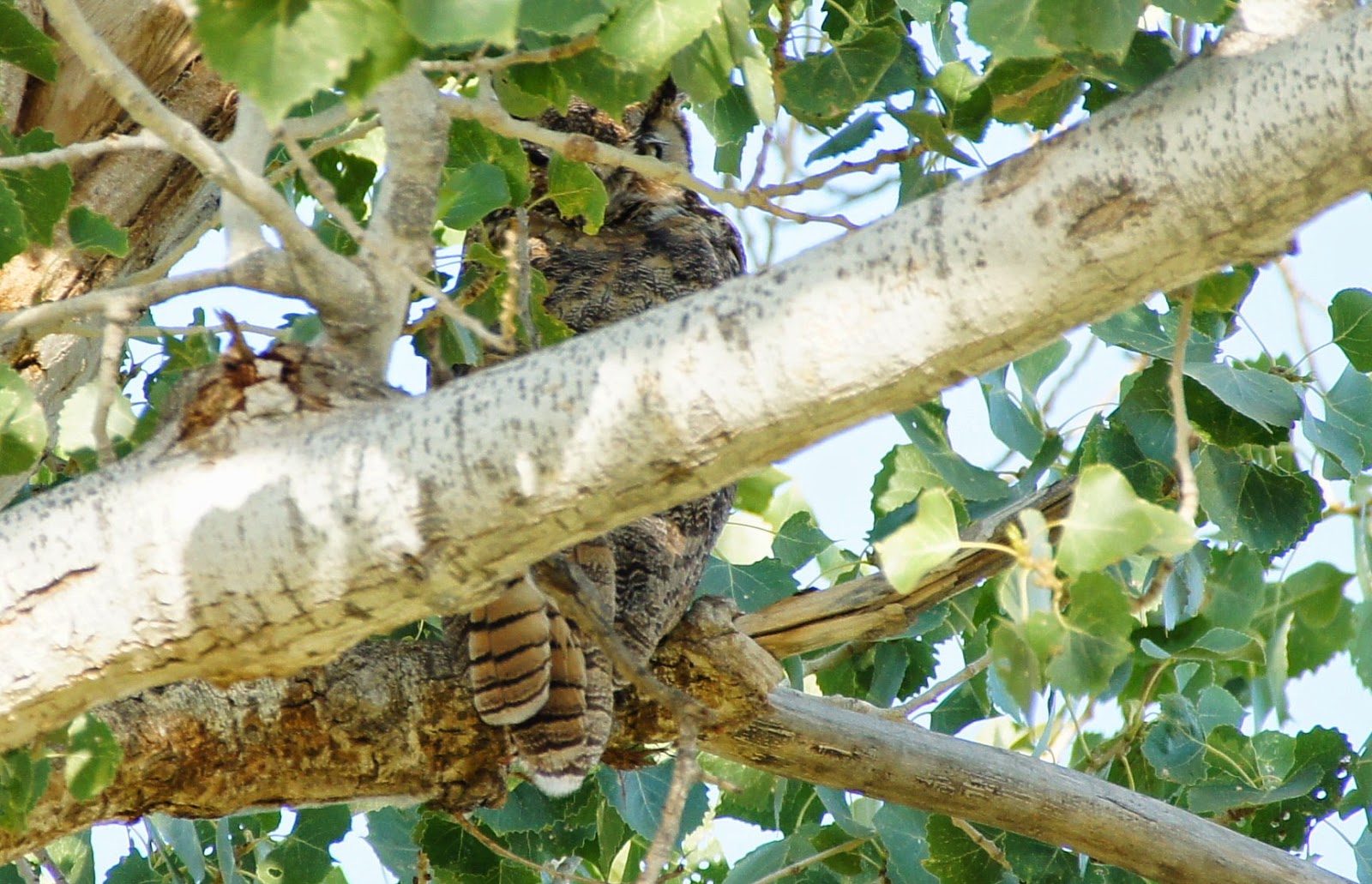 As I moved over a few feet, I was able to get more of a clear view and look at the owl, as well as a photograph. 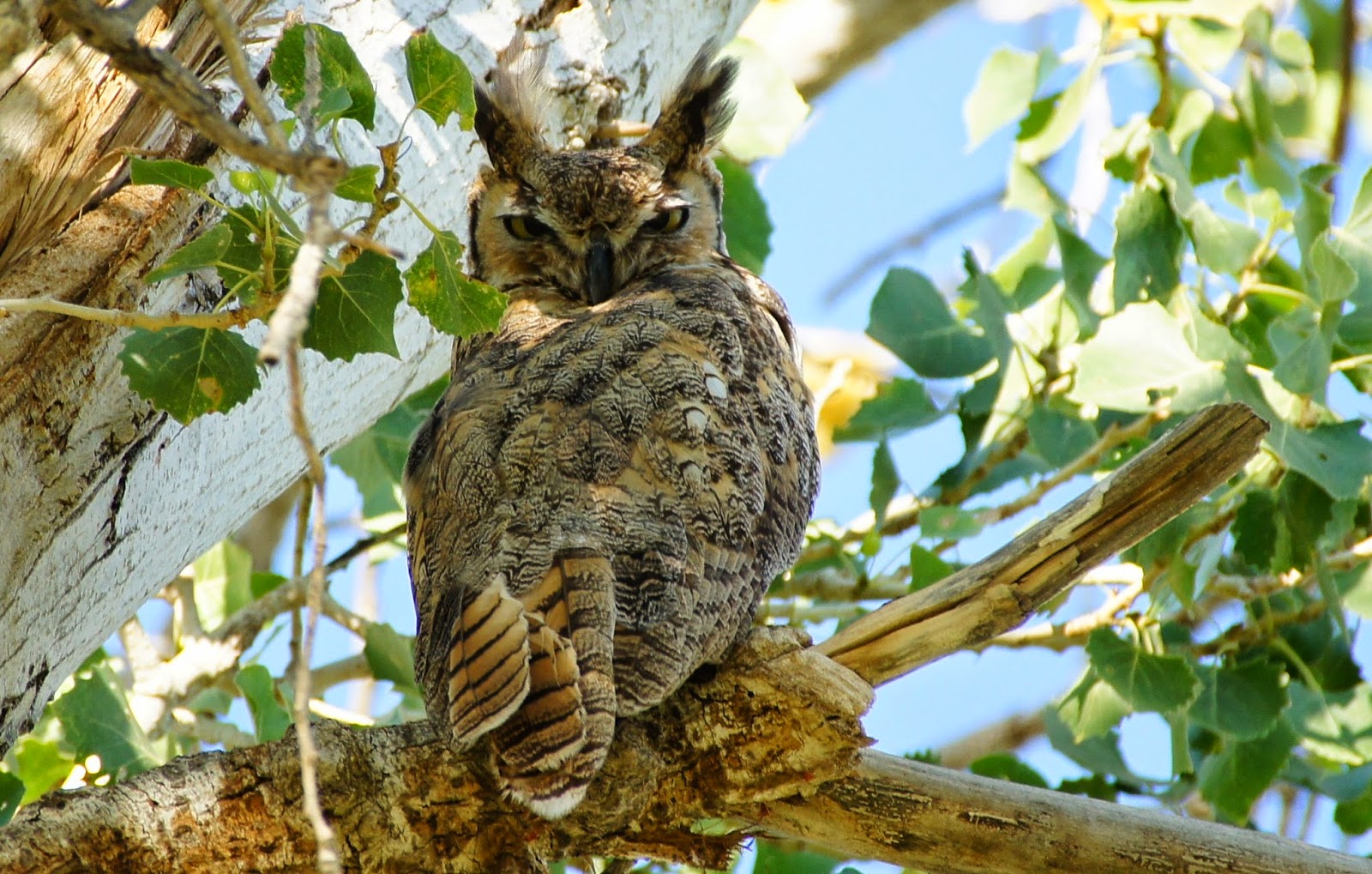 After returning to the bridge, I moved further south underneath the bridge, and my second target was quickly found.  The Barn Owl! 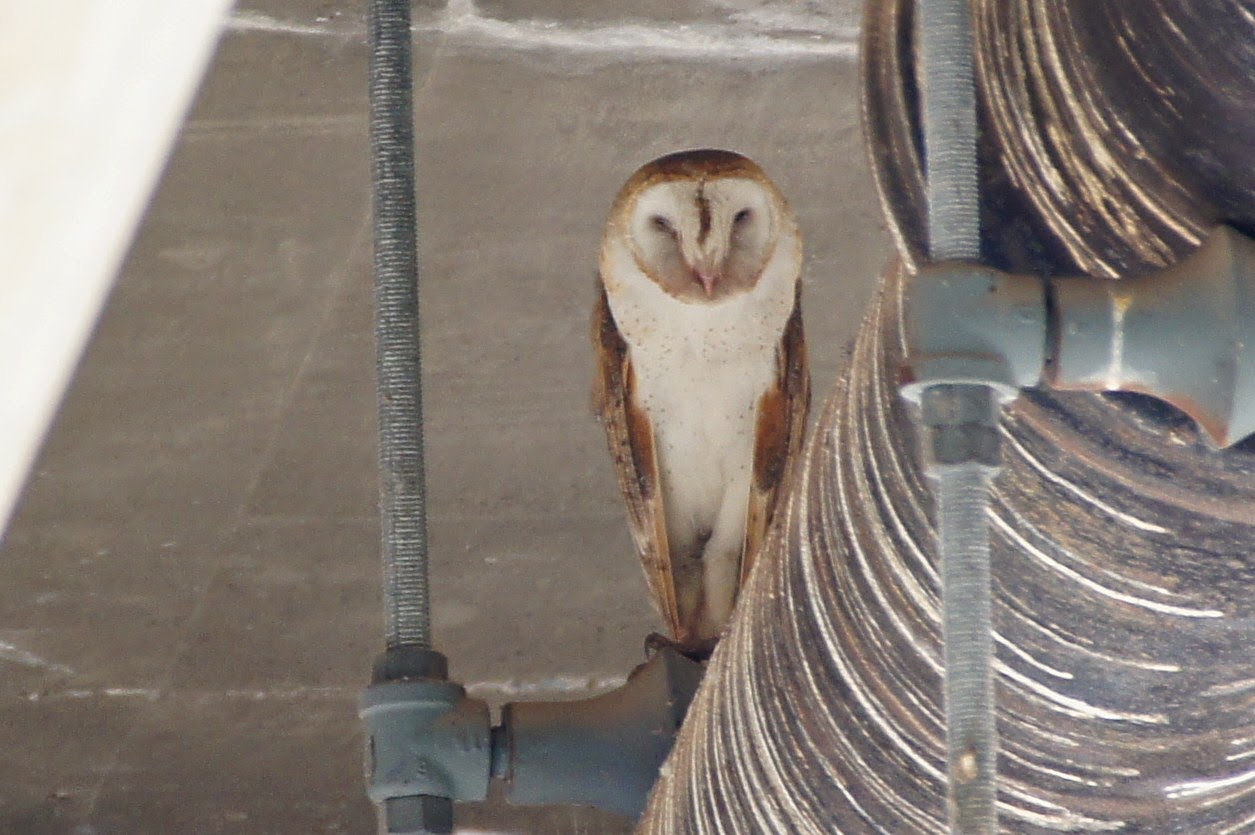 The Barn Owl is one strange looking bird.  It is rather ugly, but is also kinda pretty, and rather cool looking (Wood Stork effect) at the same time.  It's kinda creepy too, with it's "monkey face" and hunchback posture.  I love all North American Owls, but I have to say, this one is my least favorite.  Because I do love all owls, it still gets my attention every time I find one in the field.  I just find the True Owls, to be way better.  This is a male Barn Owl, and he is very weird looking.  As he quickly spooked, he ended up flying to another perch to join his better looking mate. 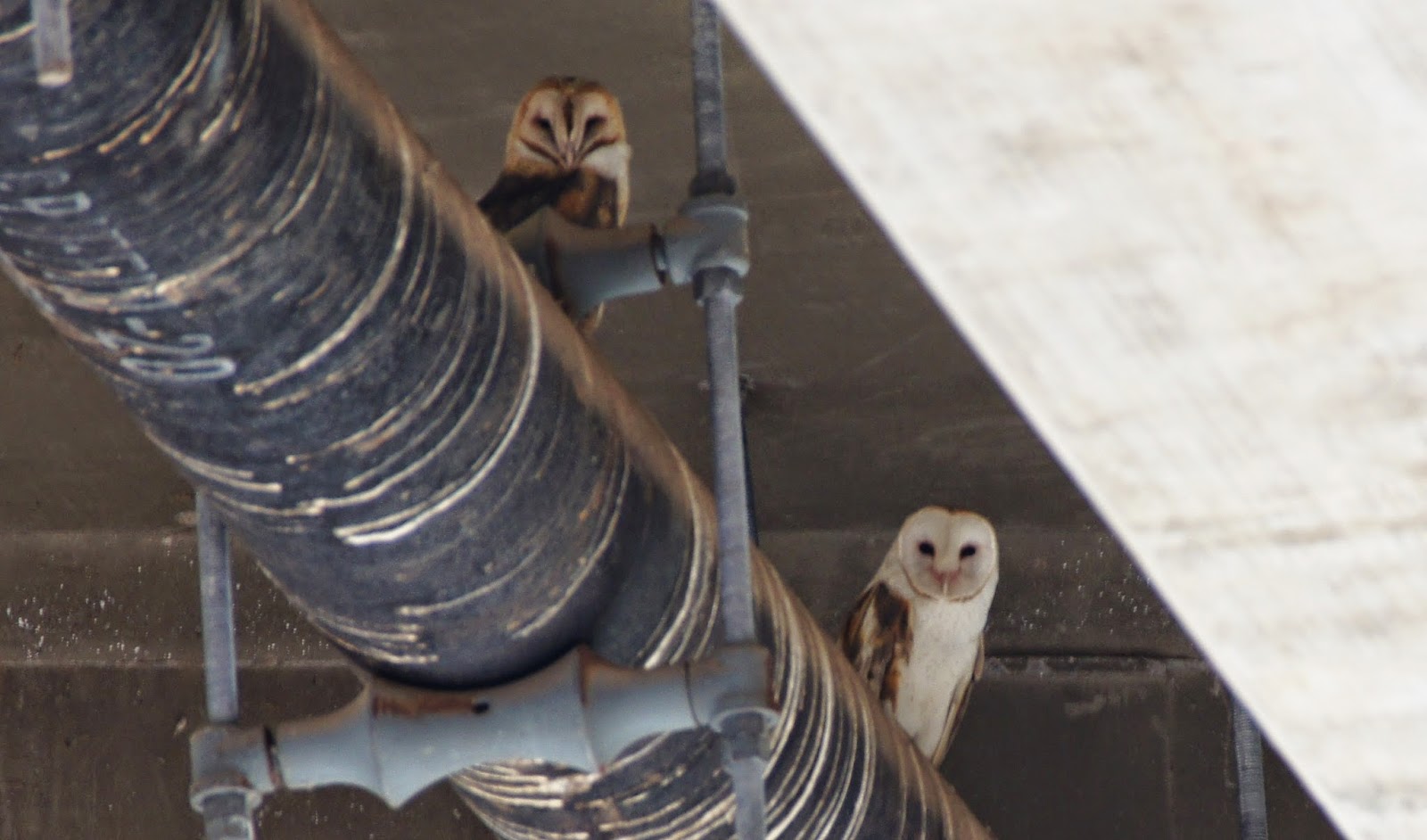 The female Barn Owl has an evident "heart-shaped" face.  Although the male doesn't show it as much, the female obviously has a lot of heart, and stays perched for eager birders wanting to have prolonged views at close range.  This female is a nice looking hooter, and that weird male is one lucky owl. 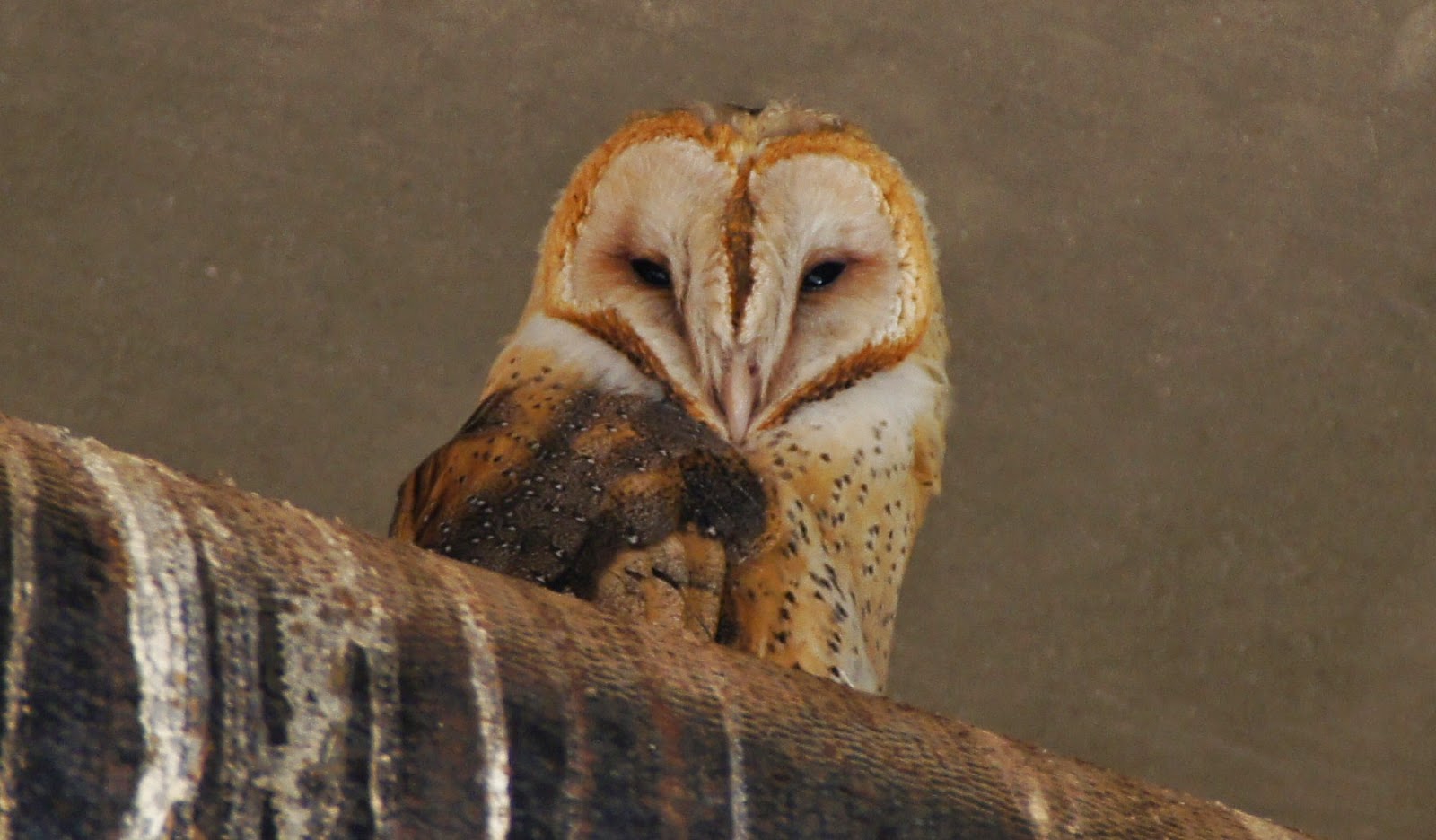 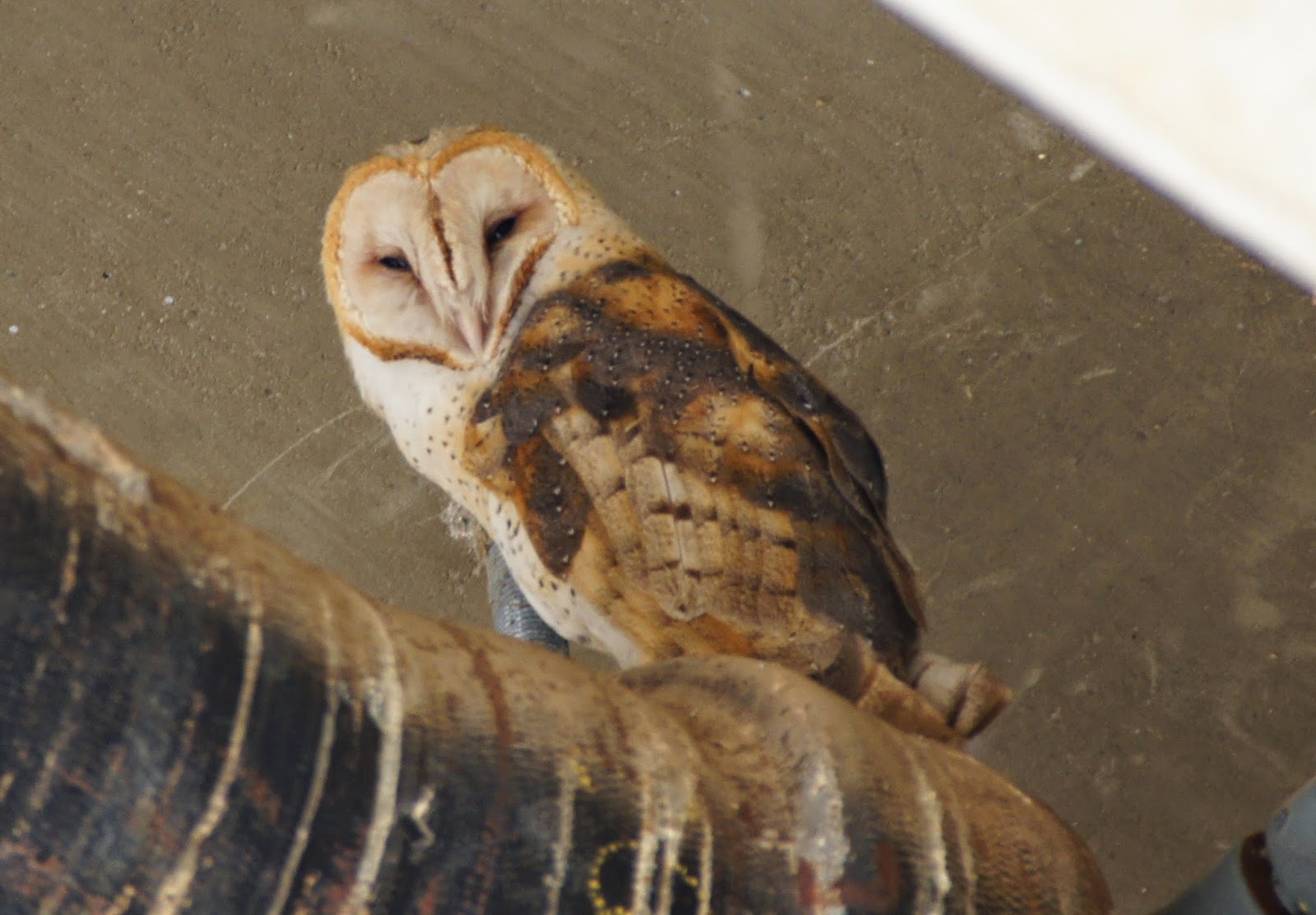 After awhile, Mr. Barn Owl was a little more cooperative. 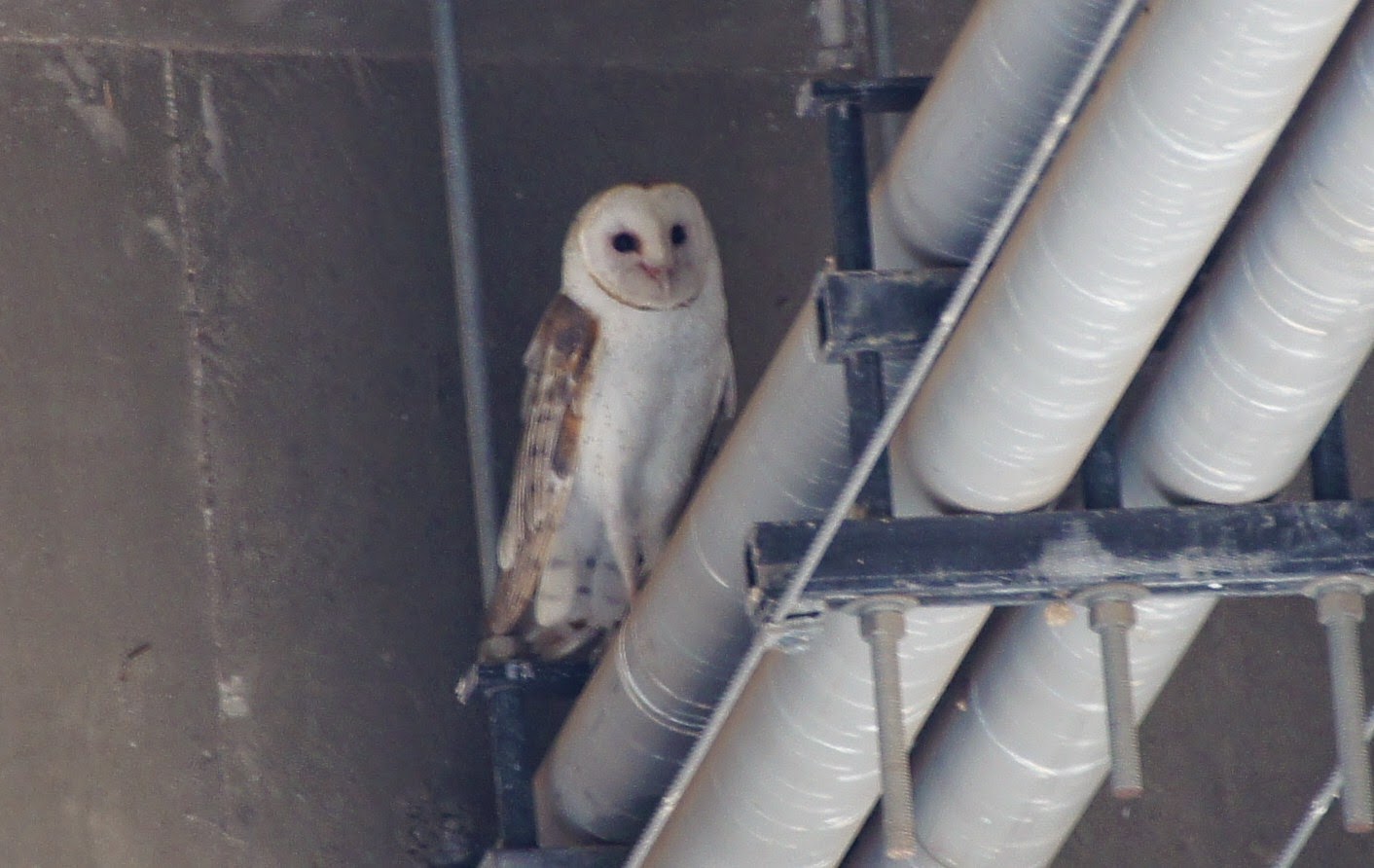 The Barn Owls are best sexed in the field by their breast color.  The male has a clean white breast while the female has buffy breast tones and spots.  The female really is cool.  And so is the male, I was just kidding. 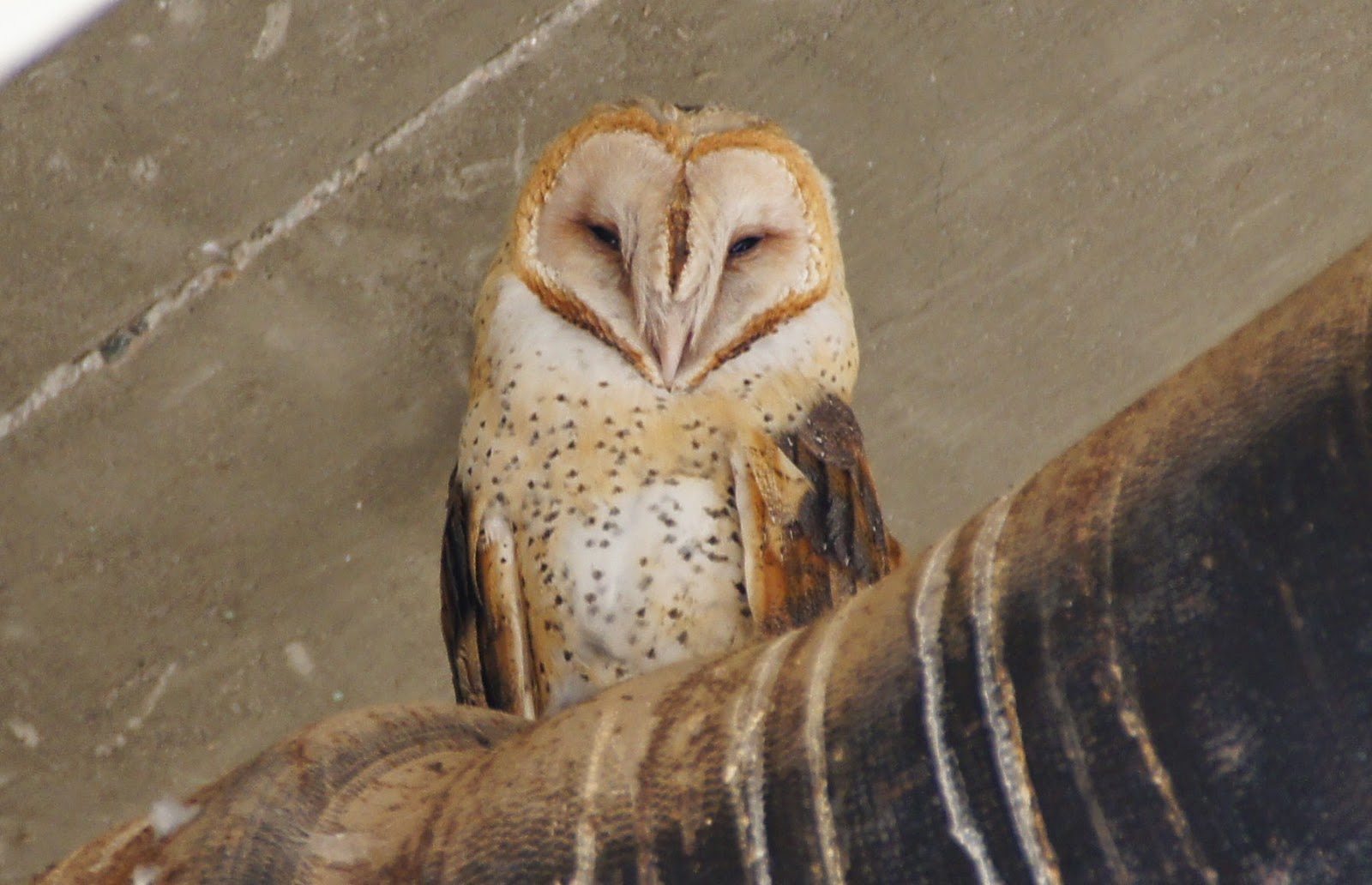 While I thought the only pictures I would get of Barn Owls today would have man made structures in them, I had a pleasant surprise.  A seemingly younger but close to adult female Barn Owl was perched along the trail near the top of a short cottonwood tree!  And the bird just sat there!!  It was basically oblivious to my presence. 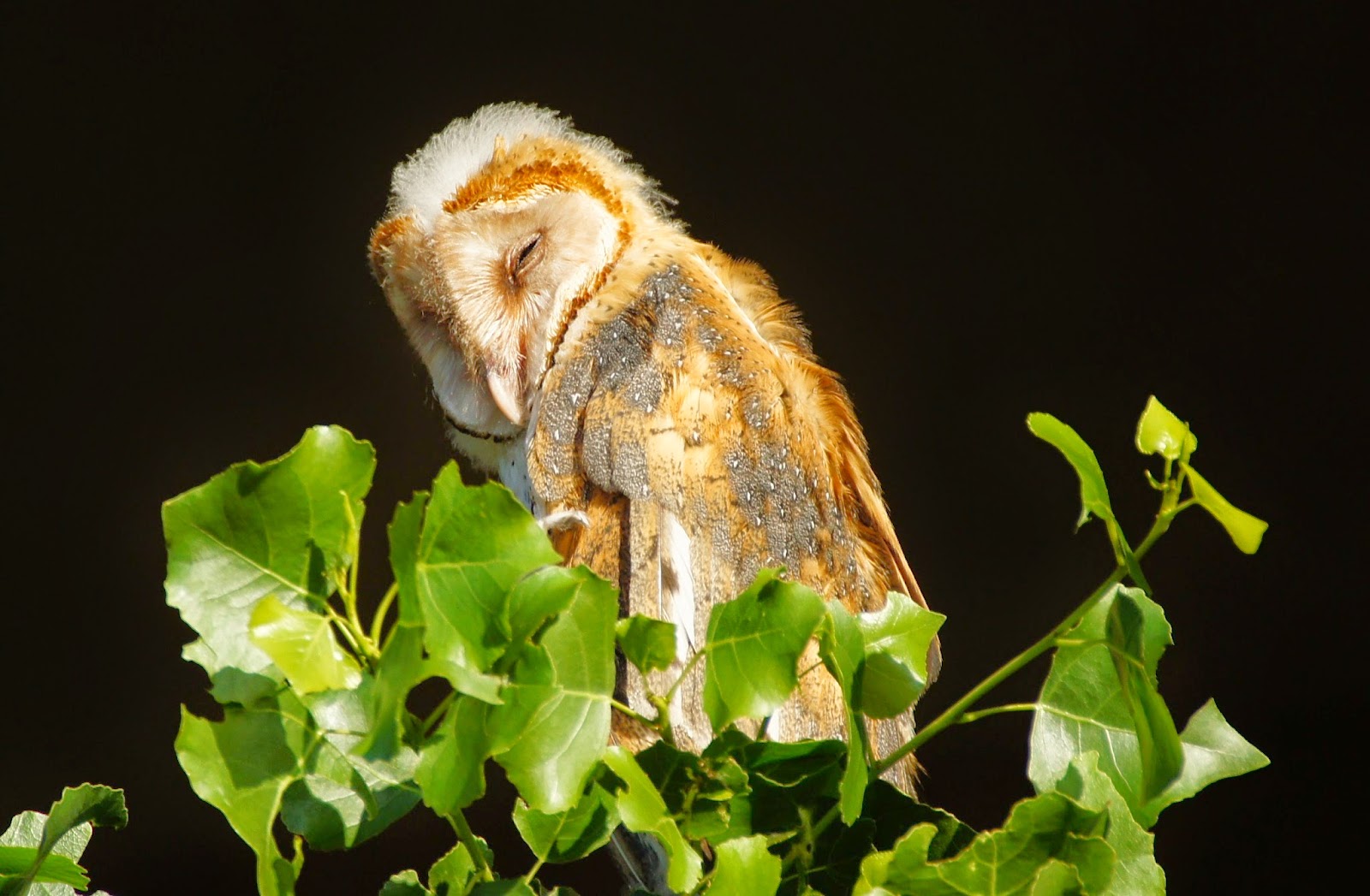 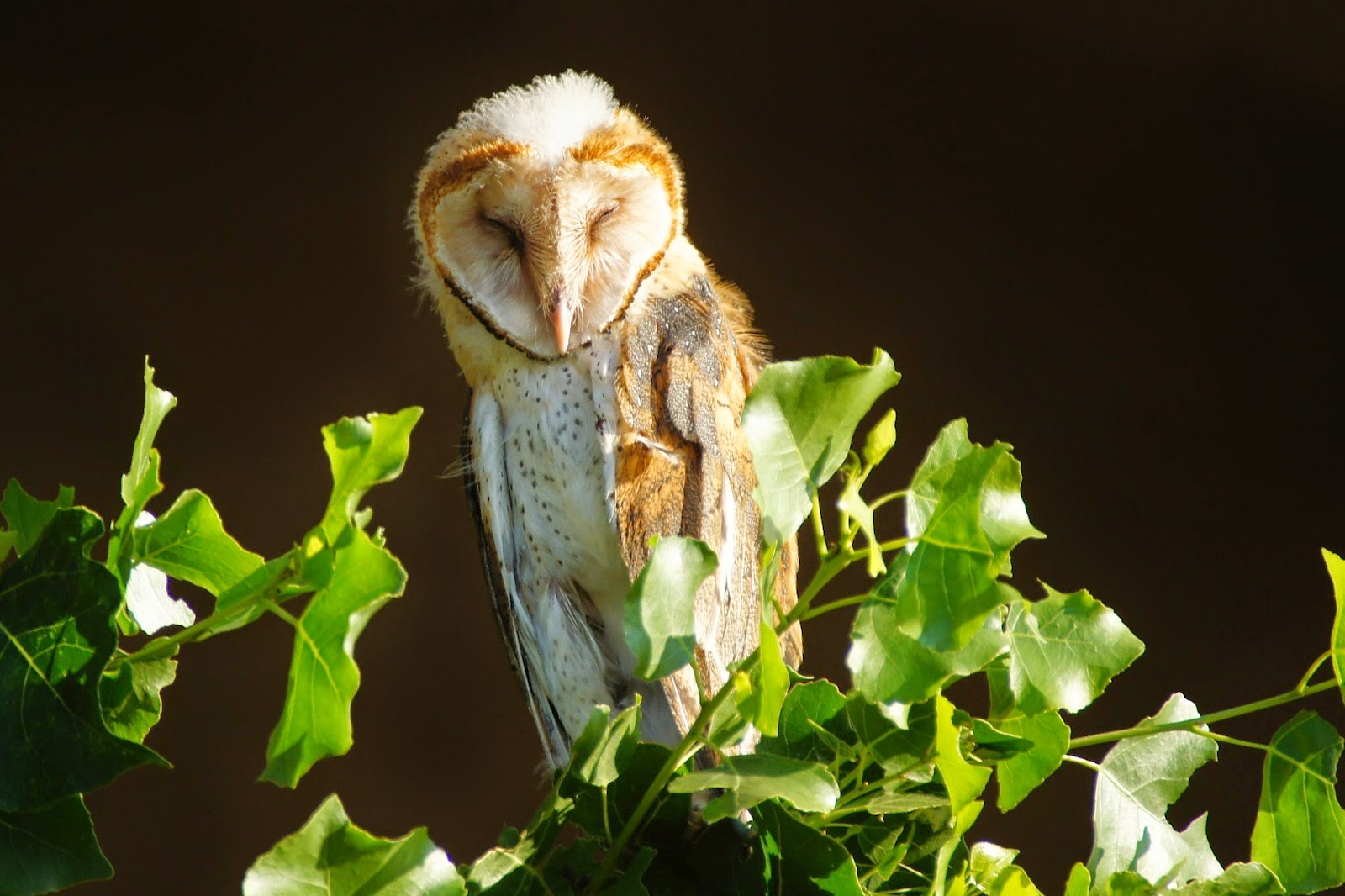 After I left for awhile in search of other targets, I came back and discovered that this owl moved to a lower perch in the tree.  I still stood there and watching the thing at close distances.  After awhile, it finally took notice of me and really started to study me up a bit.  It's head turned back-and-fourth, and it was pretty cool! 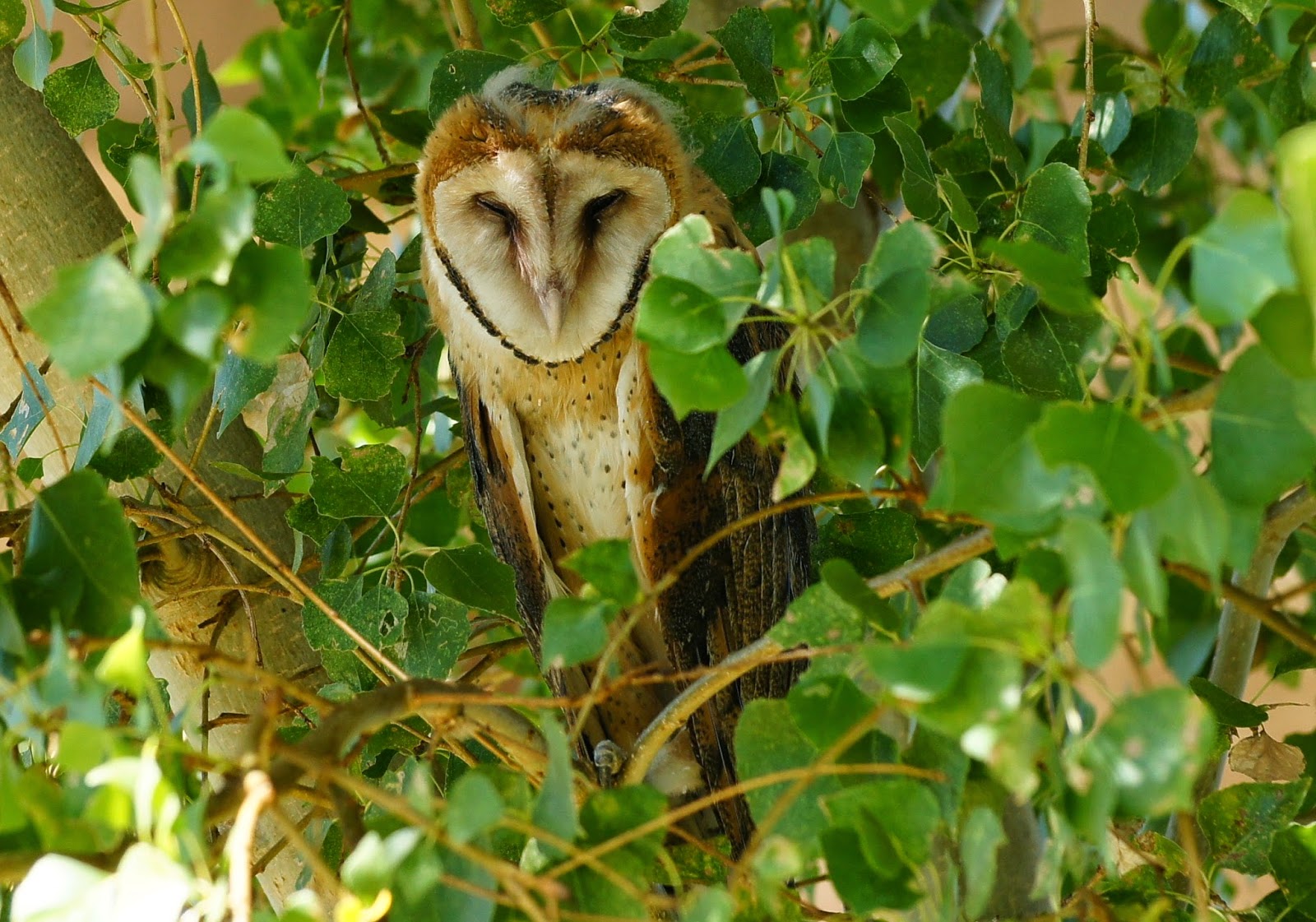 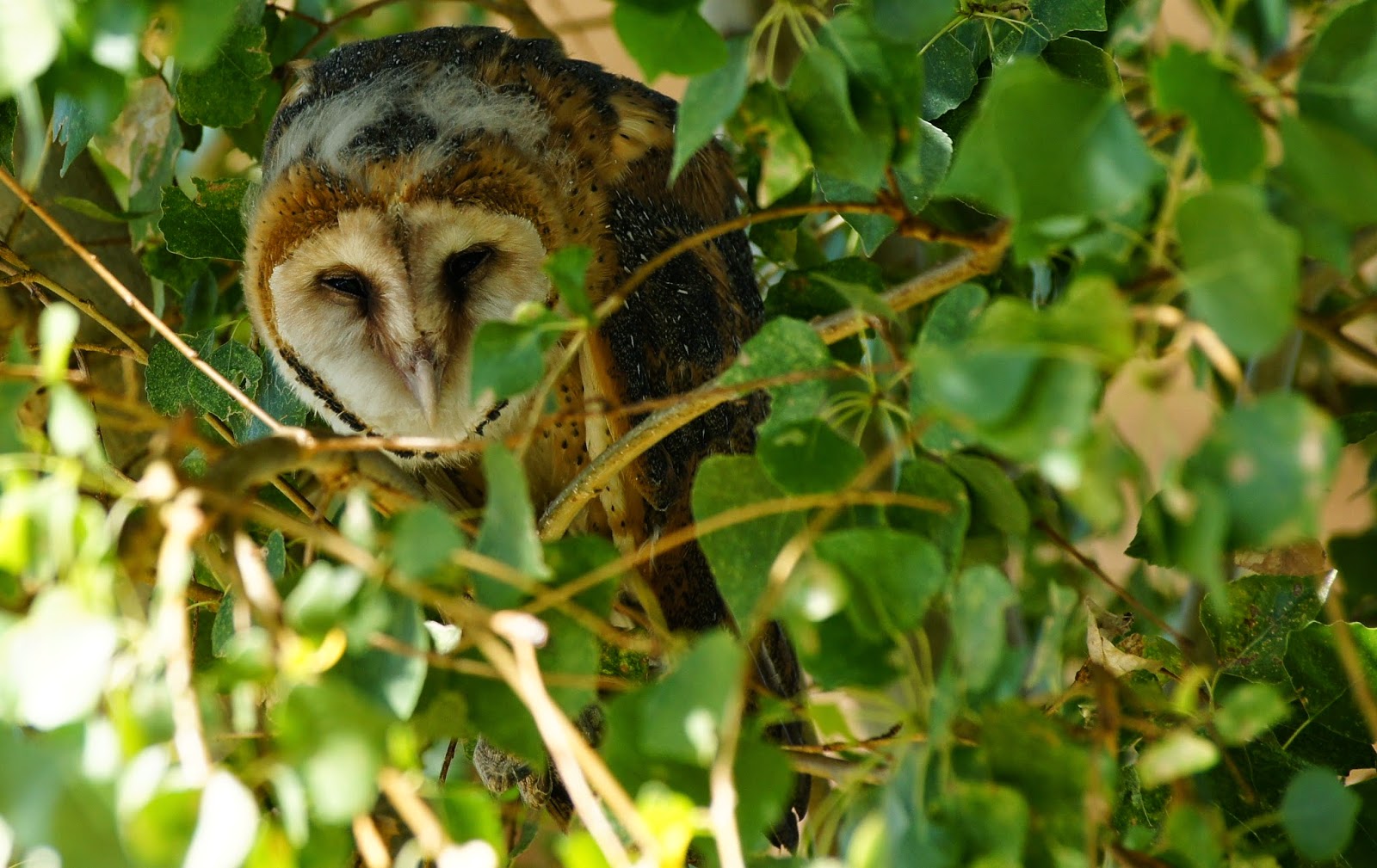 Although the owl was curious, I didn't think it would move.  I stepped a little too close and the owl got up and tried to fly to a lower perch.  It couldn't fly well, and I quickly backed off.  The bird hopped around in the tree and climbed from branch to branch to find another perch.  I did feel bad for making it leave it's chosen perch, but it was cool to see it find another perch.  It was also quite funny, because the bird really did look like a small monkey climbing around in a tree. 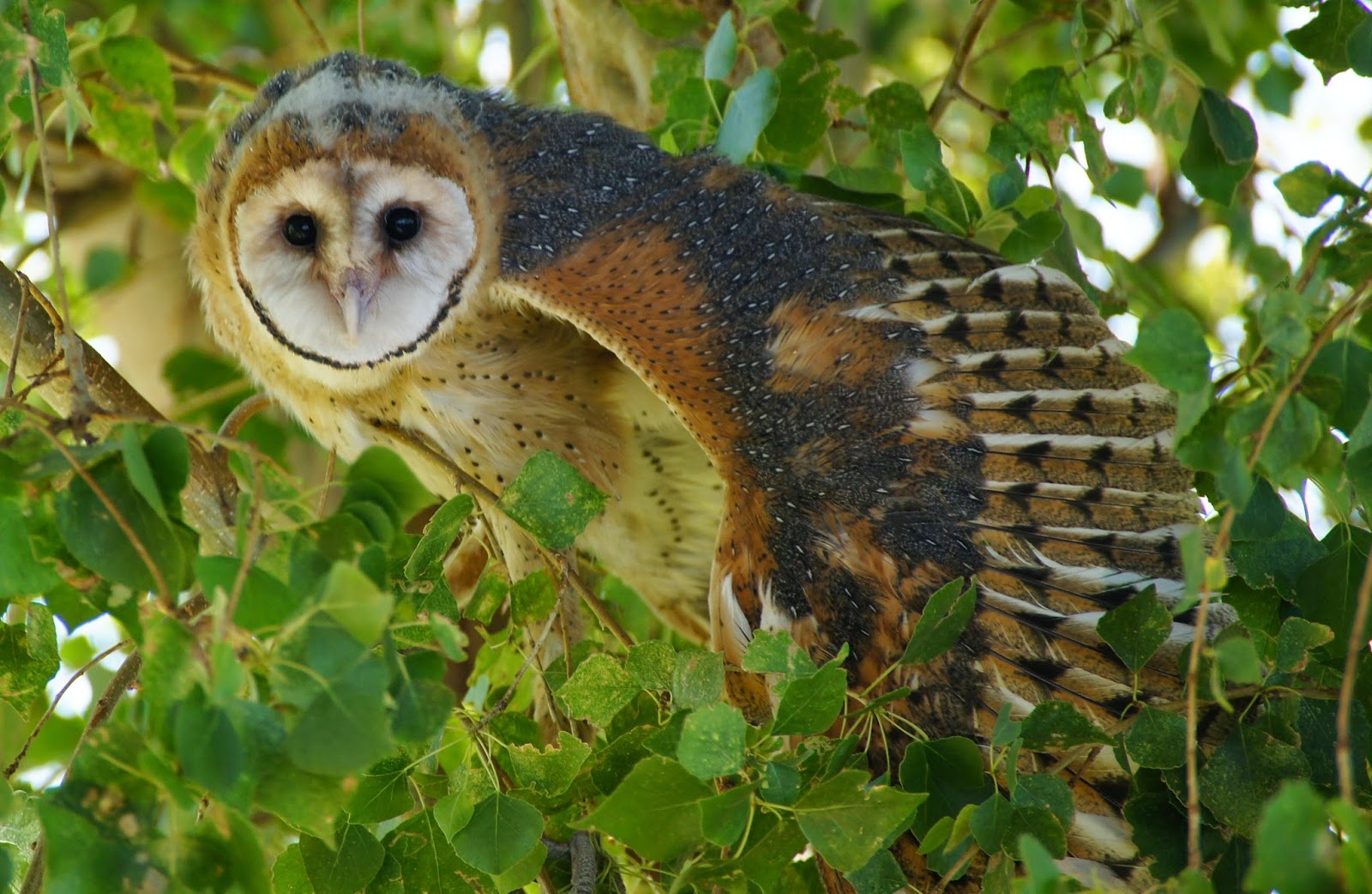 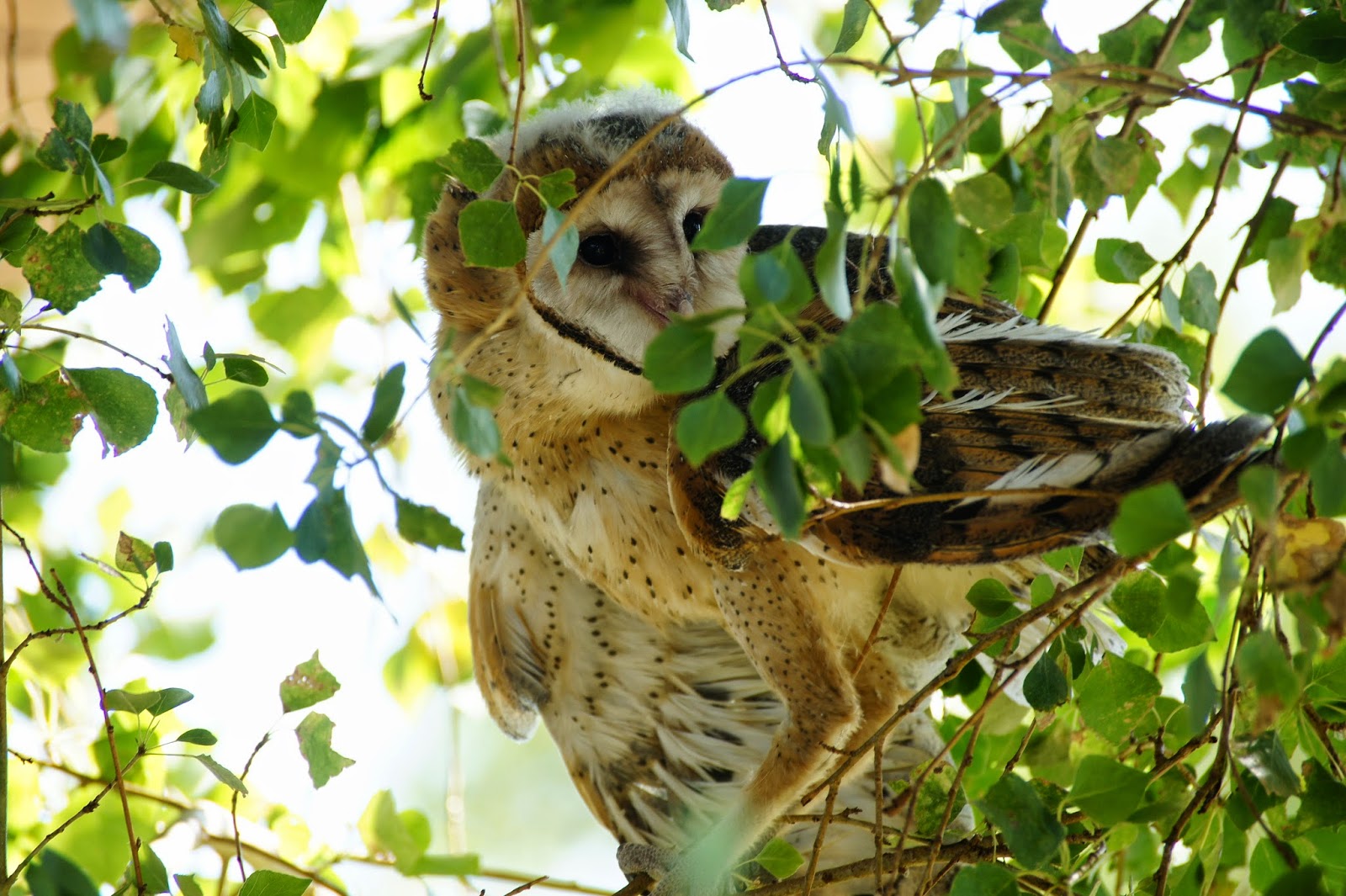 I also had the privilege of showing Jim and Pam Ripley both of the Great Horned and Barn Owls.  Both species were cooperative when the Ripleys came by with me!

While I was watching the owls throughout the morning, I heard the sound of the Yellow-billed Cuckoo coming from riparian trees along the river channel.  I quickly made my way in the direction of where the Cuckoo was calling from.  After searching, a Yellow-billed Cuckoo popped up for me! 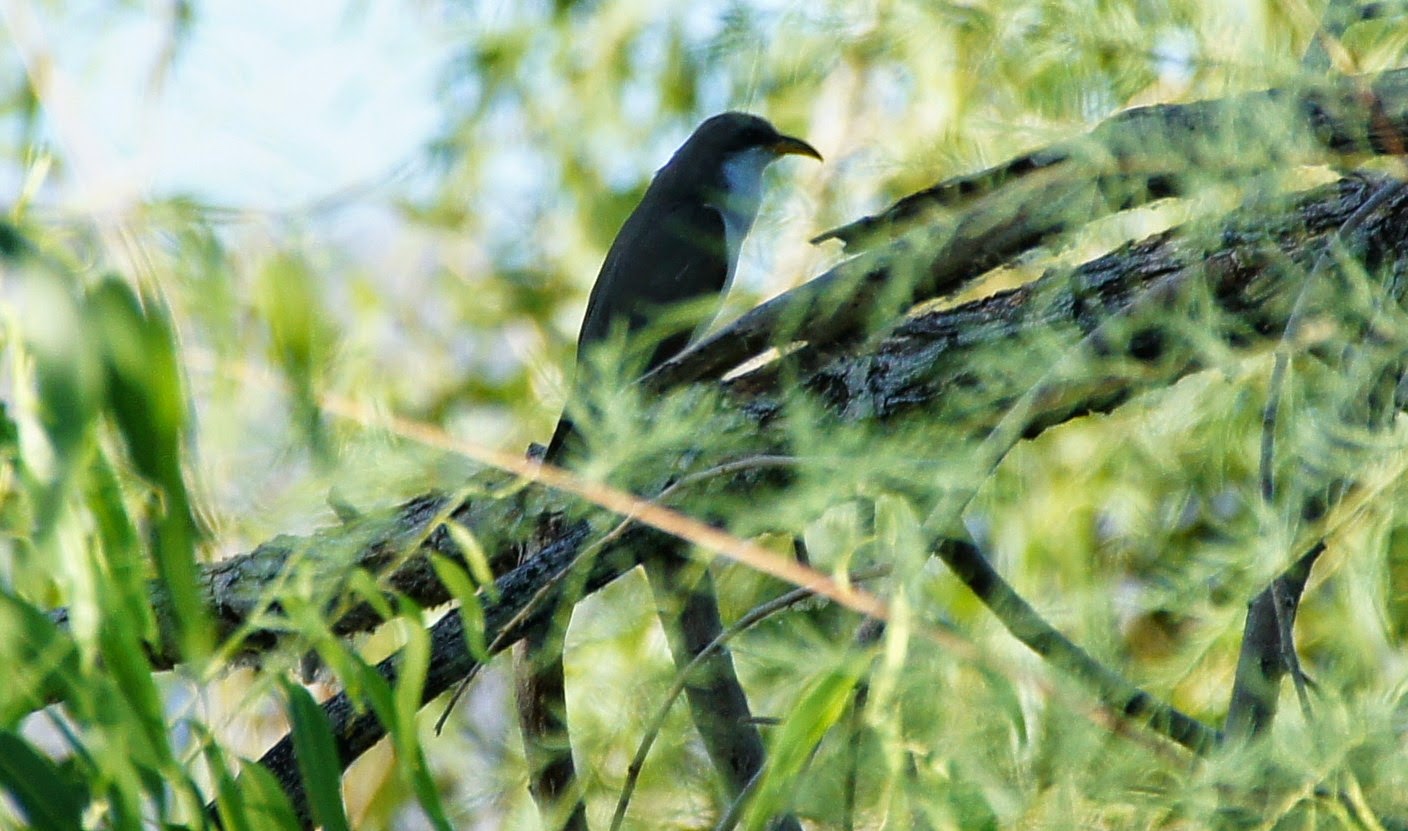 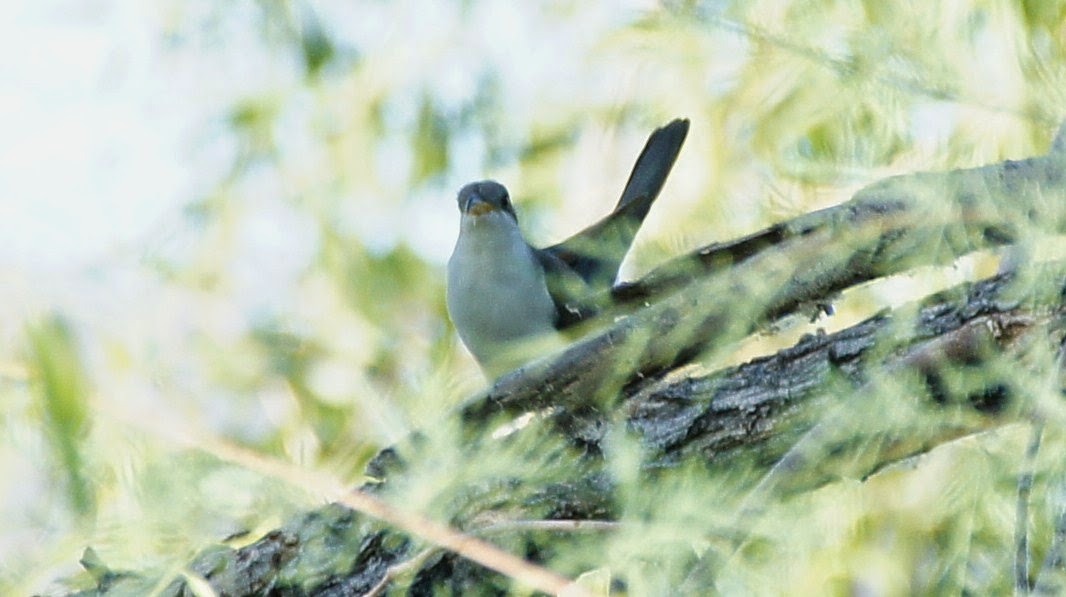 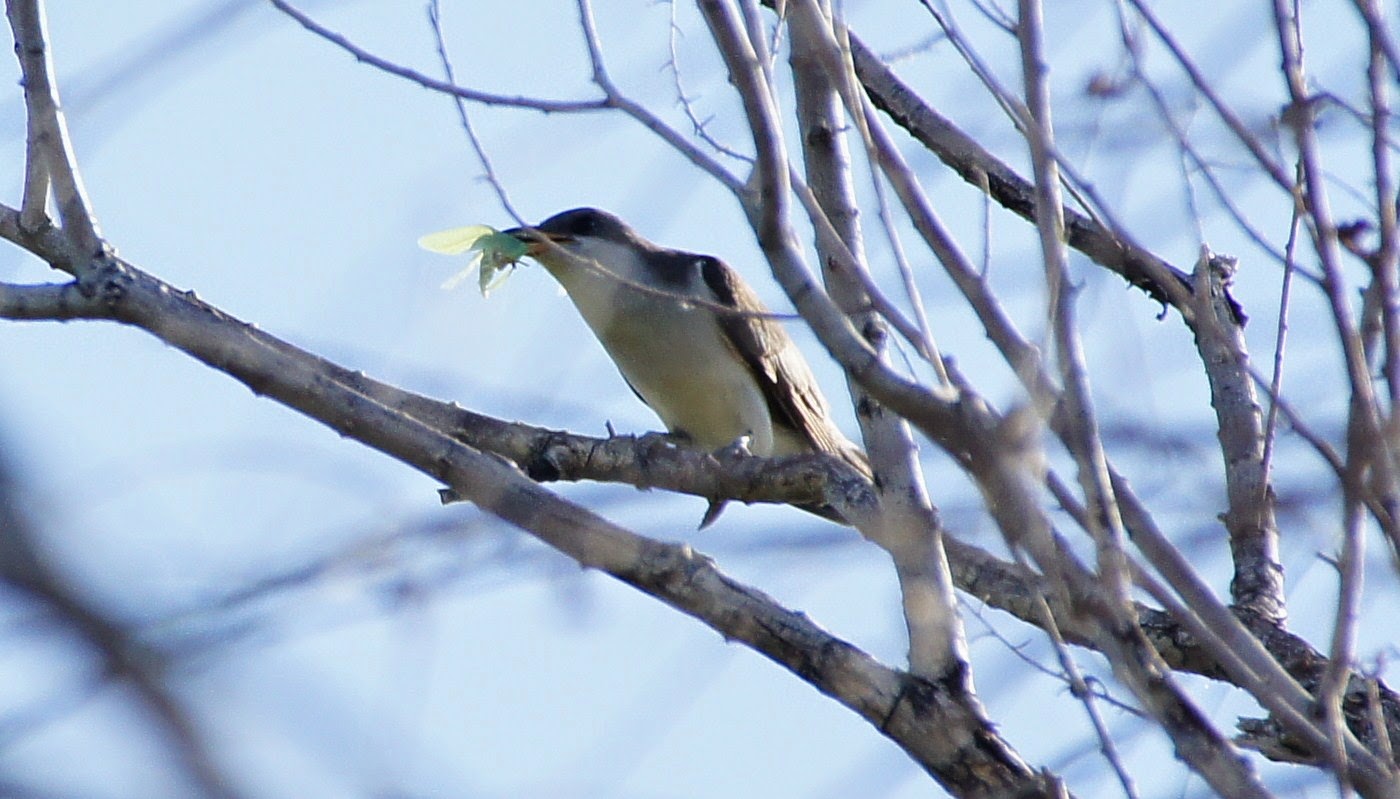 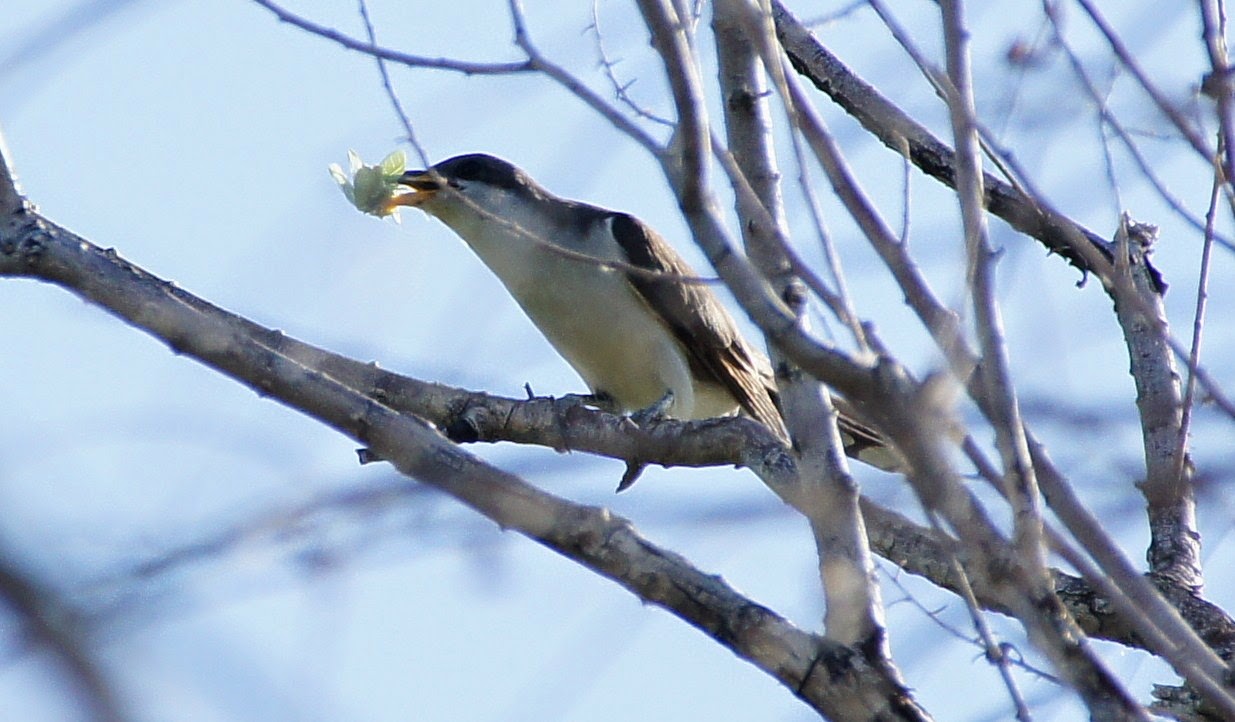 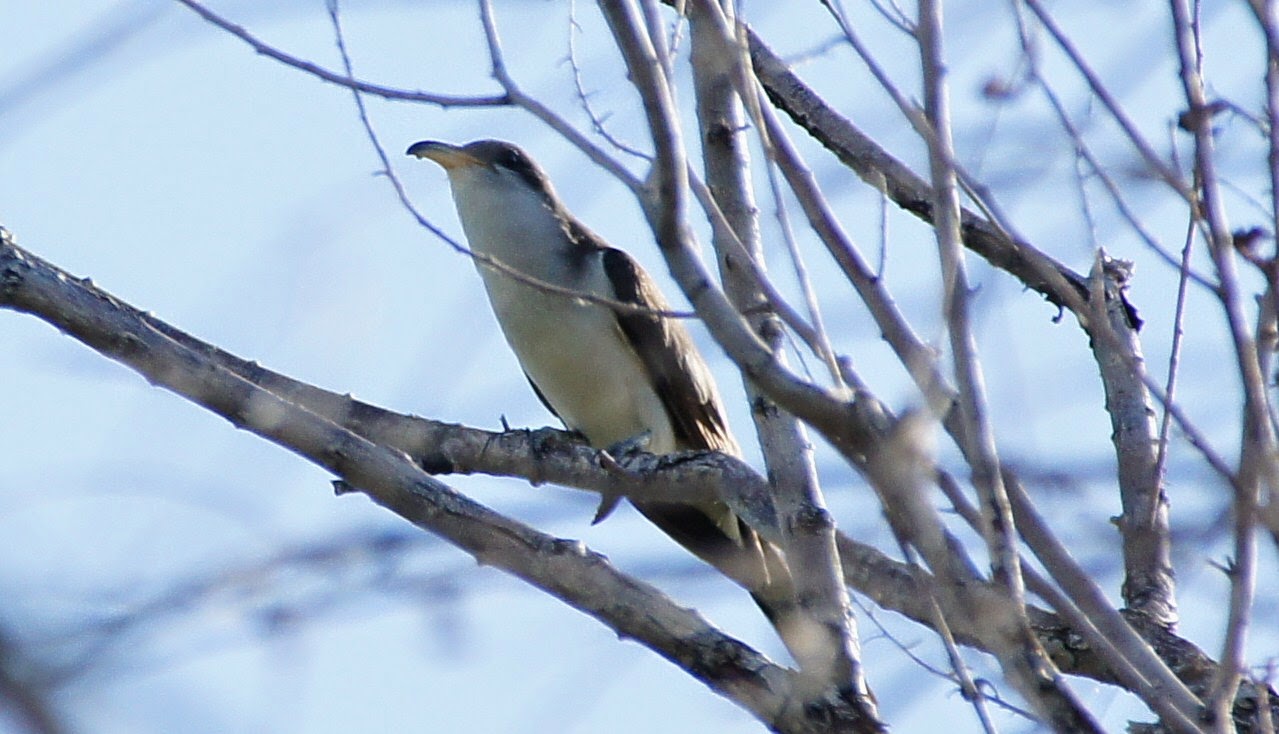 I followed the Yellow-billed Cuckoo pair for a considerable distance west down the Salt River.  When they decided to leave the north side of the river and go to the south side of the river, I was out of luck.  But I did get a few decent shots of them.  While I didn't get that killer photograph, I saw them flying along the river's riparian trees many times.  The Yellow-billed Cuckoo is very fun to watch in flight also.  Ironically, a Greater Roadrunner was sitting on the ground below one of the Cuckoo's perches.  It was cool to see two cuckoos, one tree-dwelling and one ground-dwelling, in the same view.  The Yellow-billed Cuckoo is usually a very elusive bird.  It usually isn't scared of people, but it usually sits still and hides in dense foliage of tall trees, which makes it a hard observation visually. 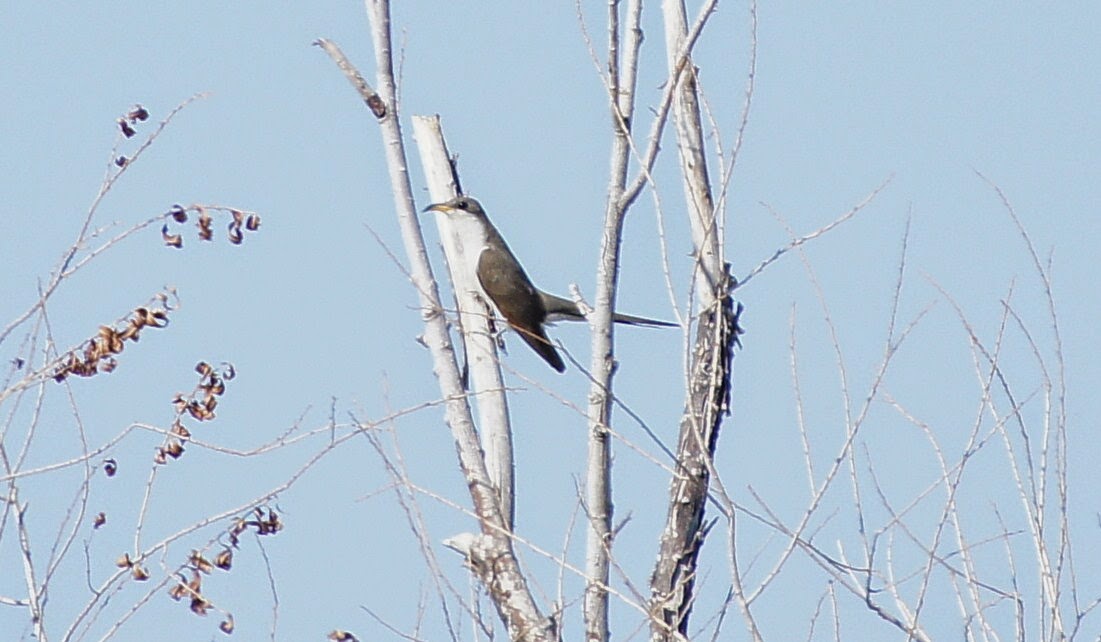 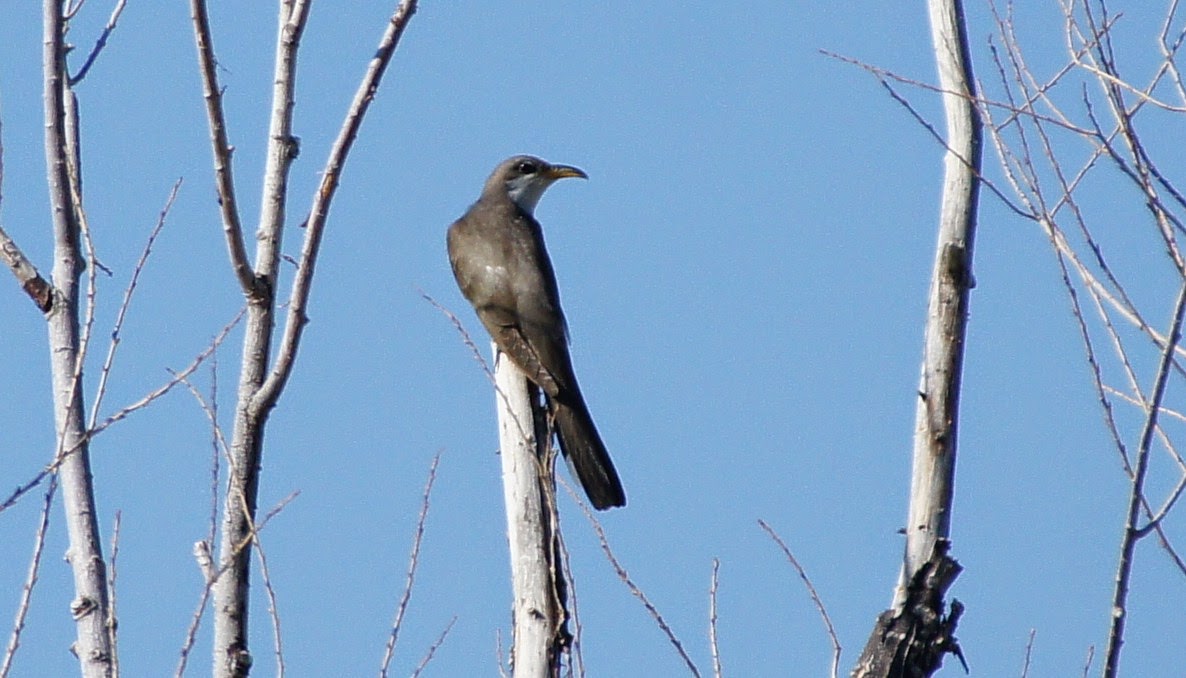 Minutes later, I heard my fourth target calling, a Least Bittern.  There were two Least Bitterns calling back-and-fourth, and I caught sight of a female fly into a set of reeds and perch in the open.  It has probably been over a year since I've had a decent and perched visual of a Least Bittern.  Although heard often, finding a Least Bittern is an entirely different story!  But today, I got lucky! 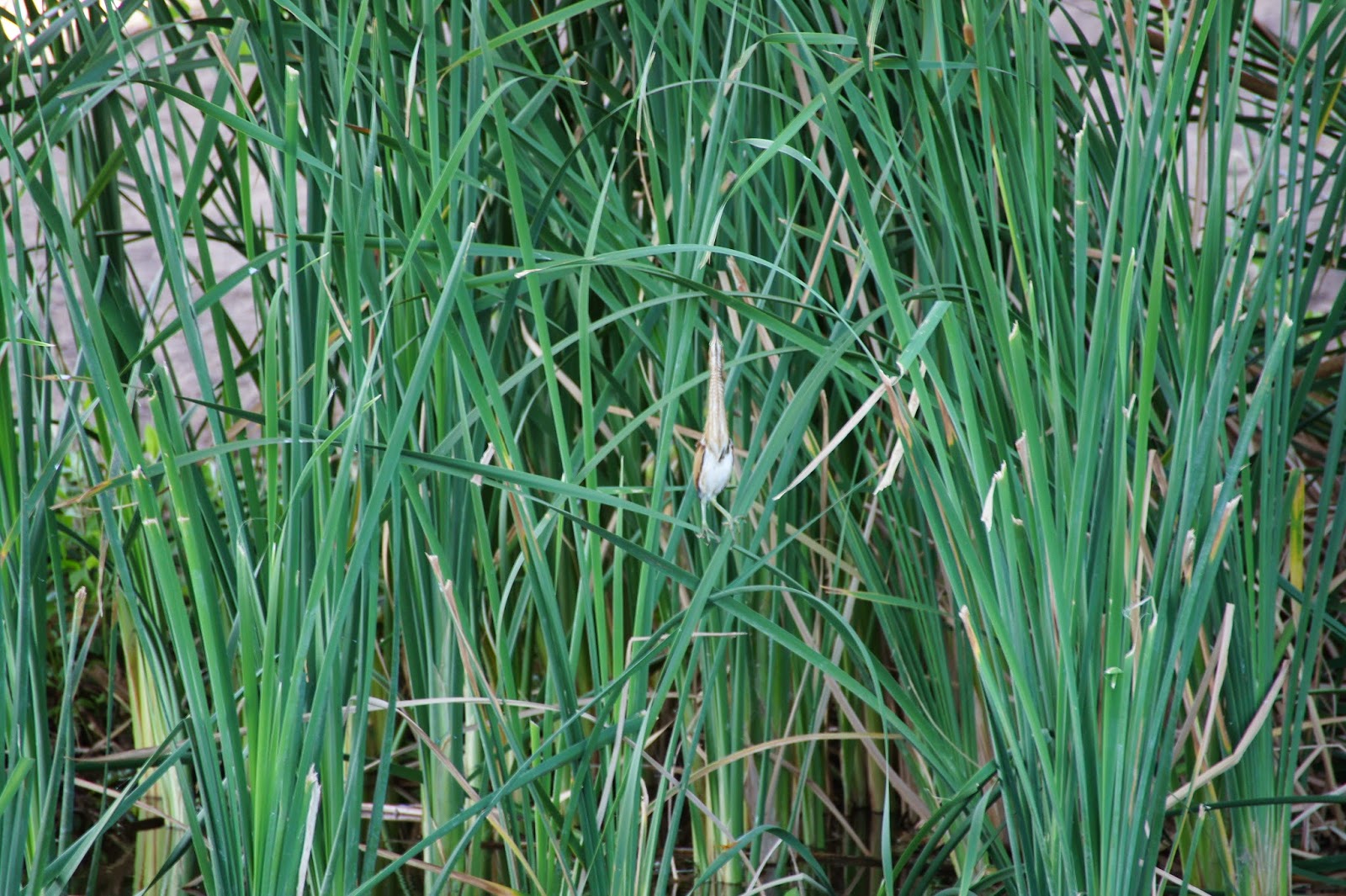 As shown above, the Least Bittern was somewhat in it's freeze mode.  It really does blend in with the reeds it calls home very easily!  I managed to get a few shots of this female Least Bittern before it flew off. 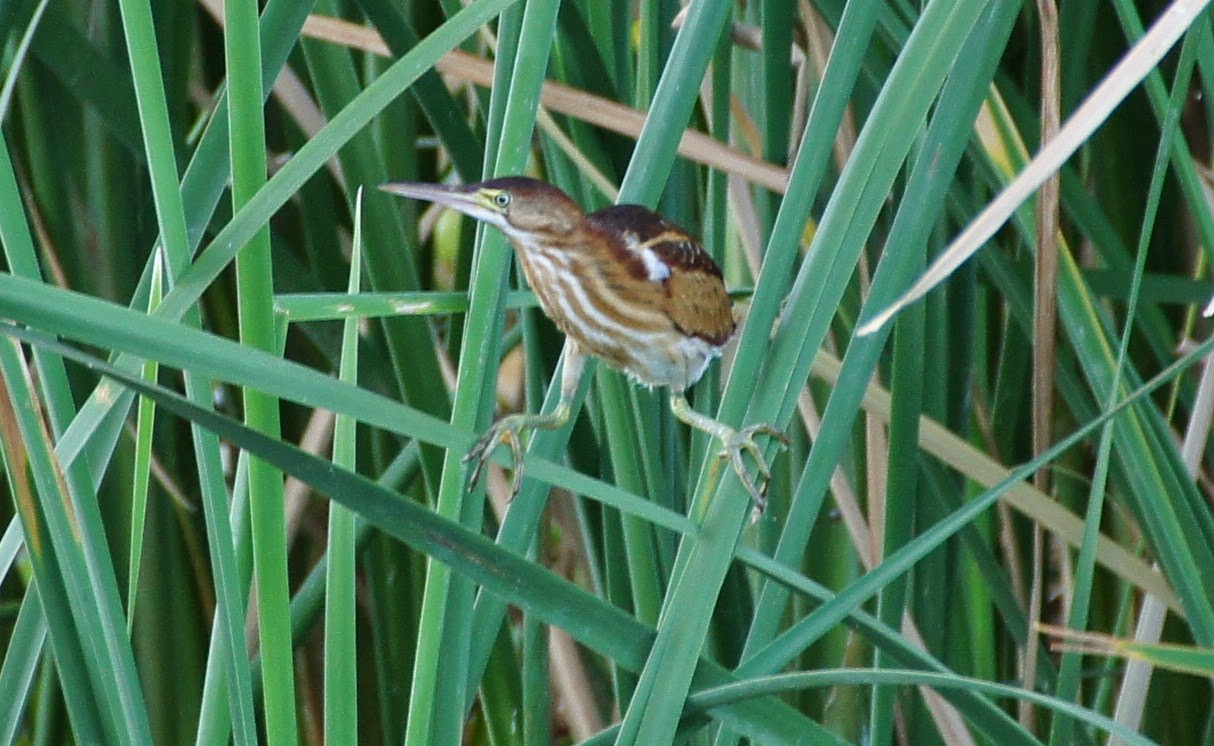 When I came back with Jim and Pam to show them owls, I got lucky and found the Least Bittern again.  This time, it let me have better photo opportunities and a more prolonged observation. 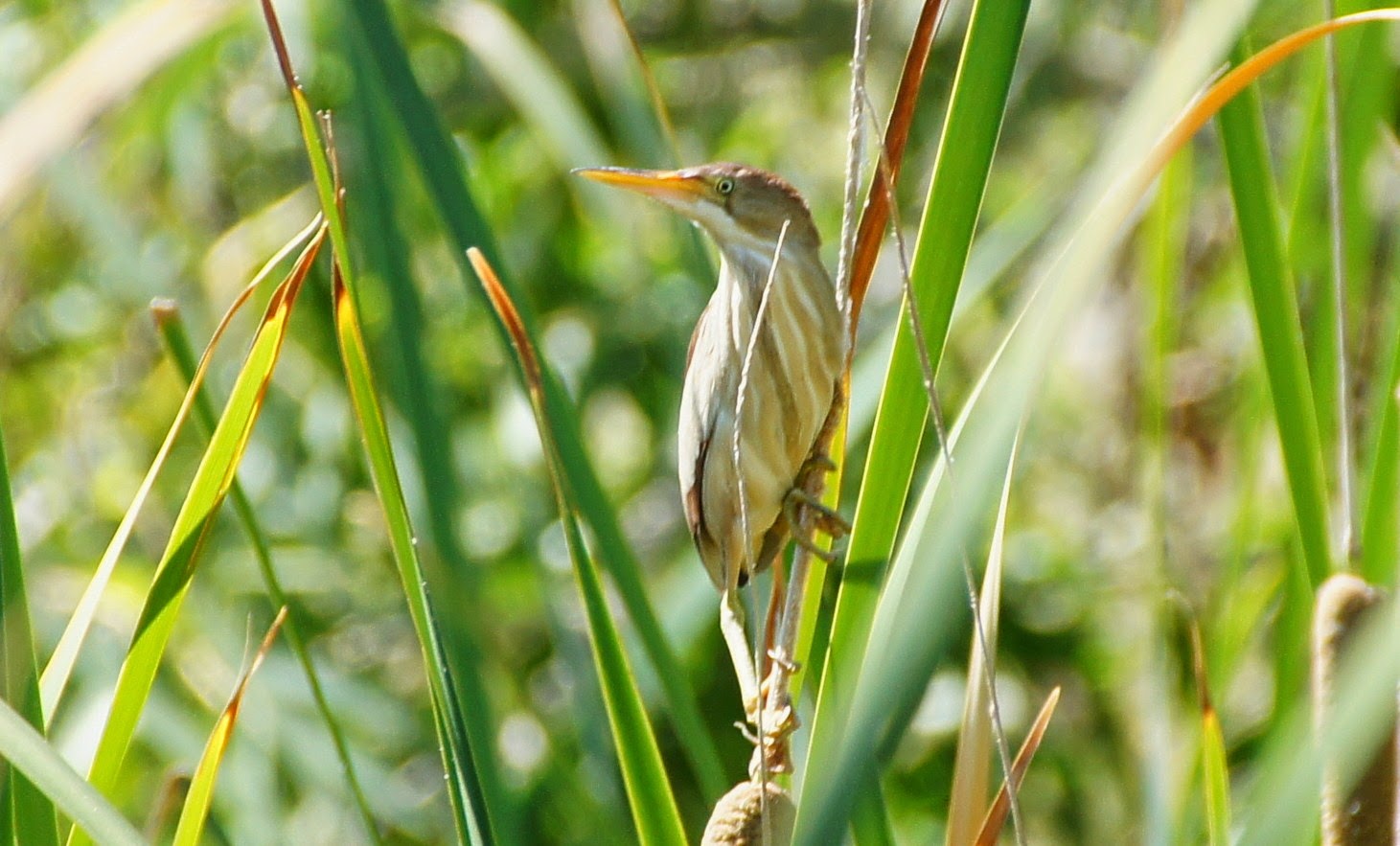 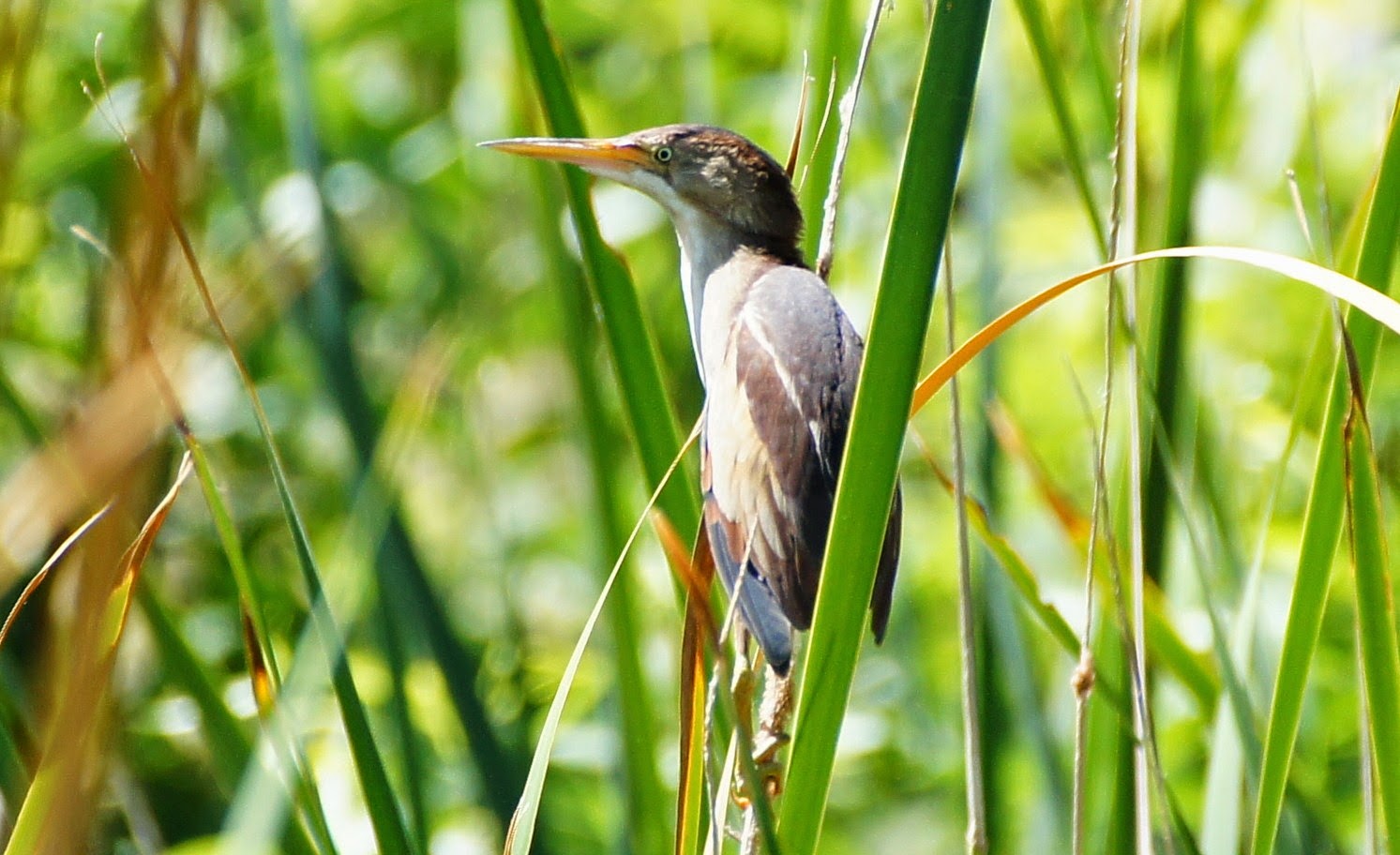 I tried for Clapper Rails without success.  The Clapper Rail is one I have had great luck with previously here in the past, but not today.  As far as target birding goes, you usually can't get all of them.  I was very thankful to get 4 out of 5 detected and all 4 of those photographed!  The Baseline and Meridian Wildlife Area is one that I don't bird much anymore, but it does have some awesome birding at times.  Thanks to Caleb Strand for starting this string at this area and for re-finding these cool birds here!  Here are a few scene shots of the Baseline and Meridian Wildlife Area. 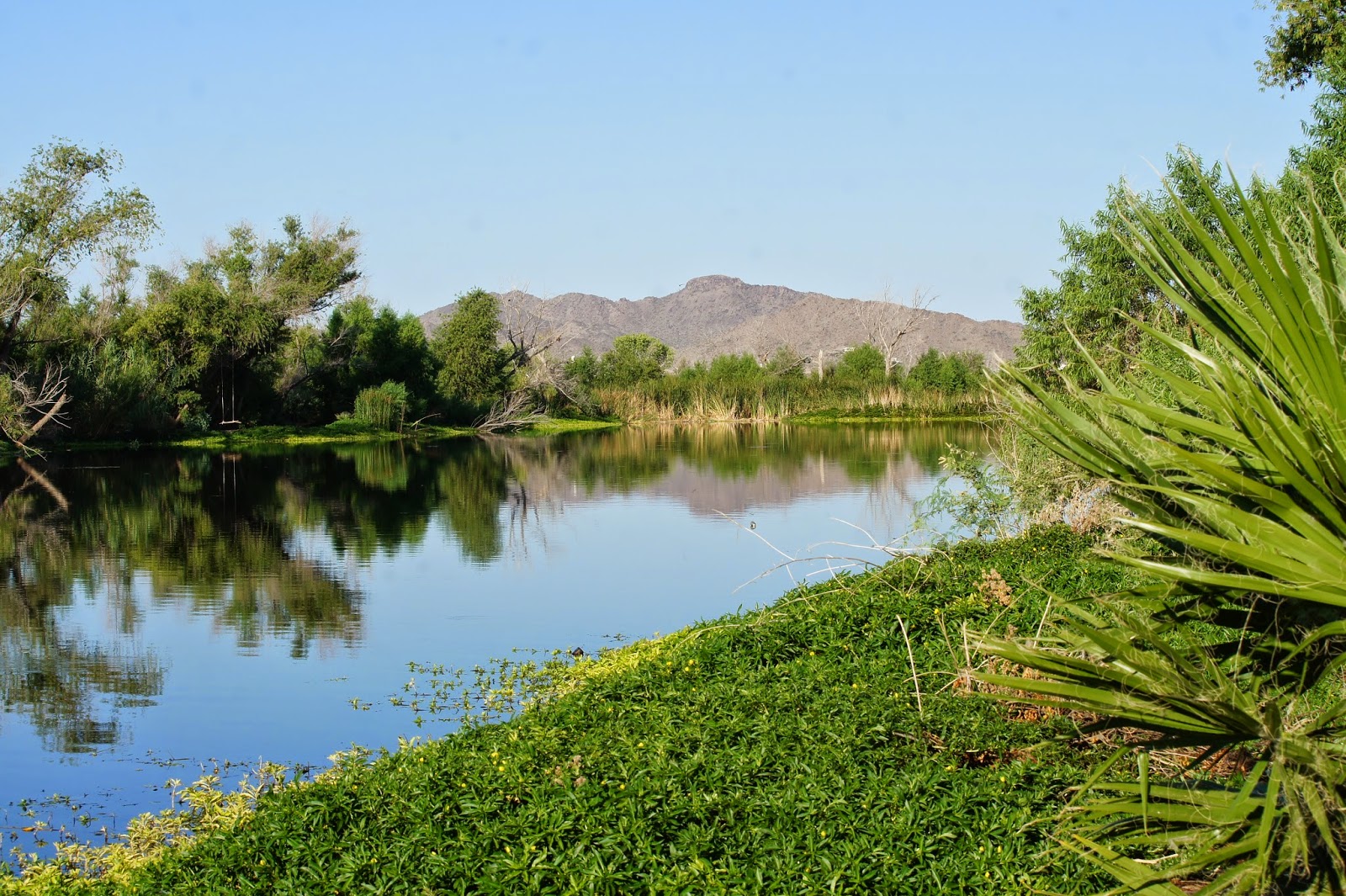 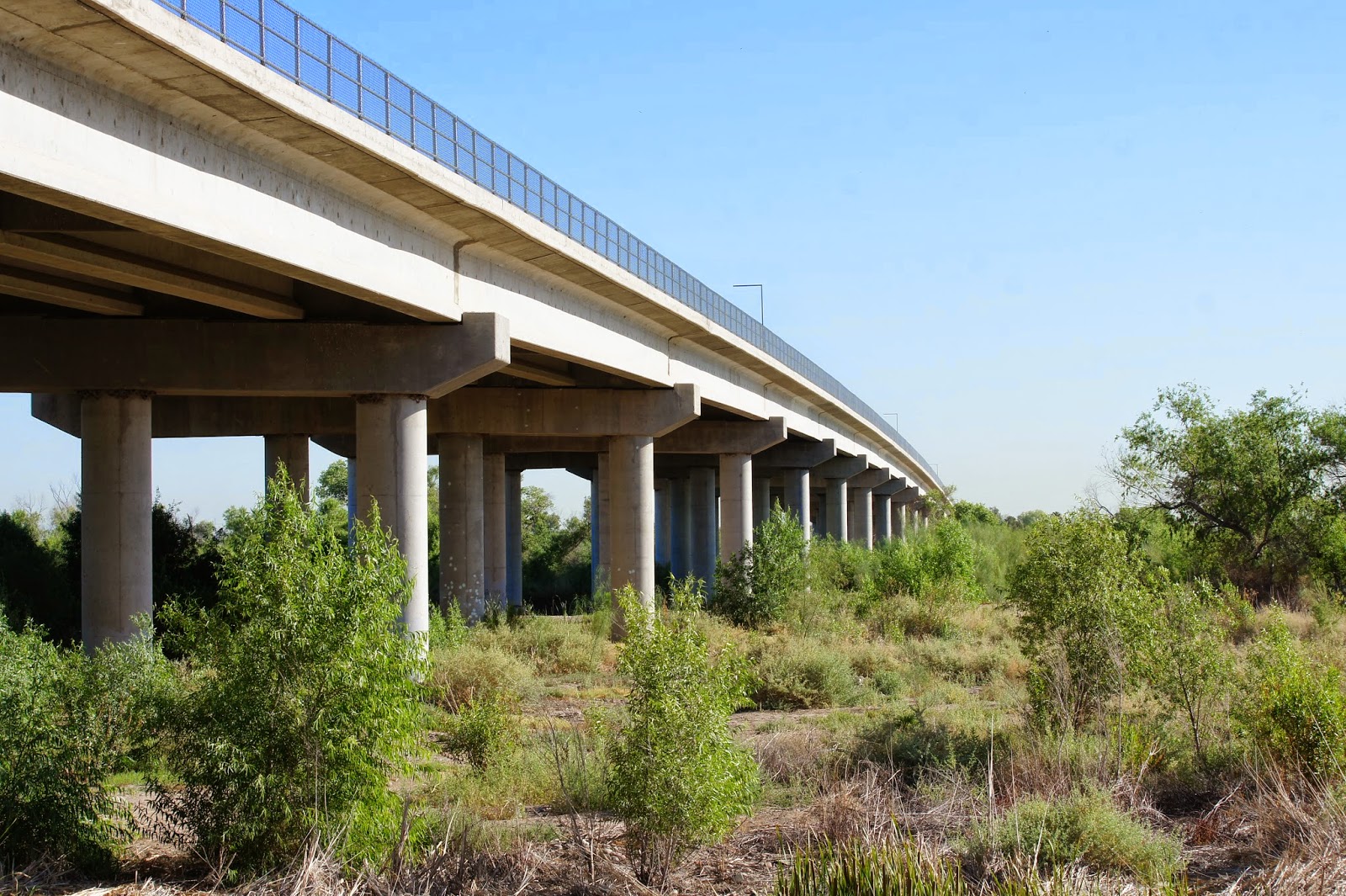 For grins, I also took a shot of the cottonwood tree that the Barn Owl was perched in from a distance away.  Can you find the Owl in this picture? 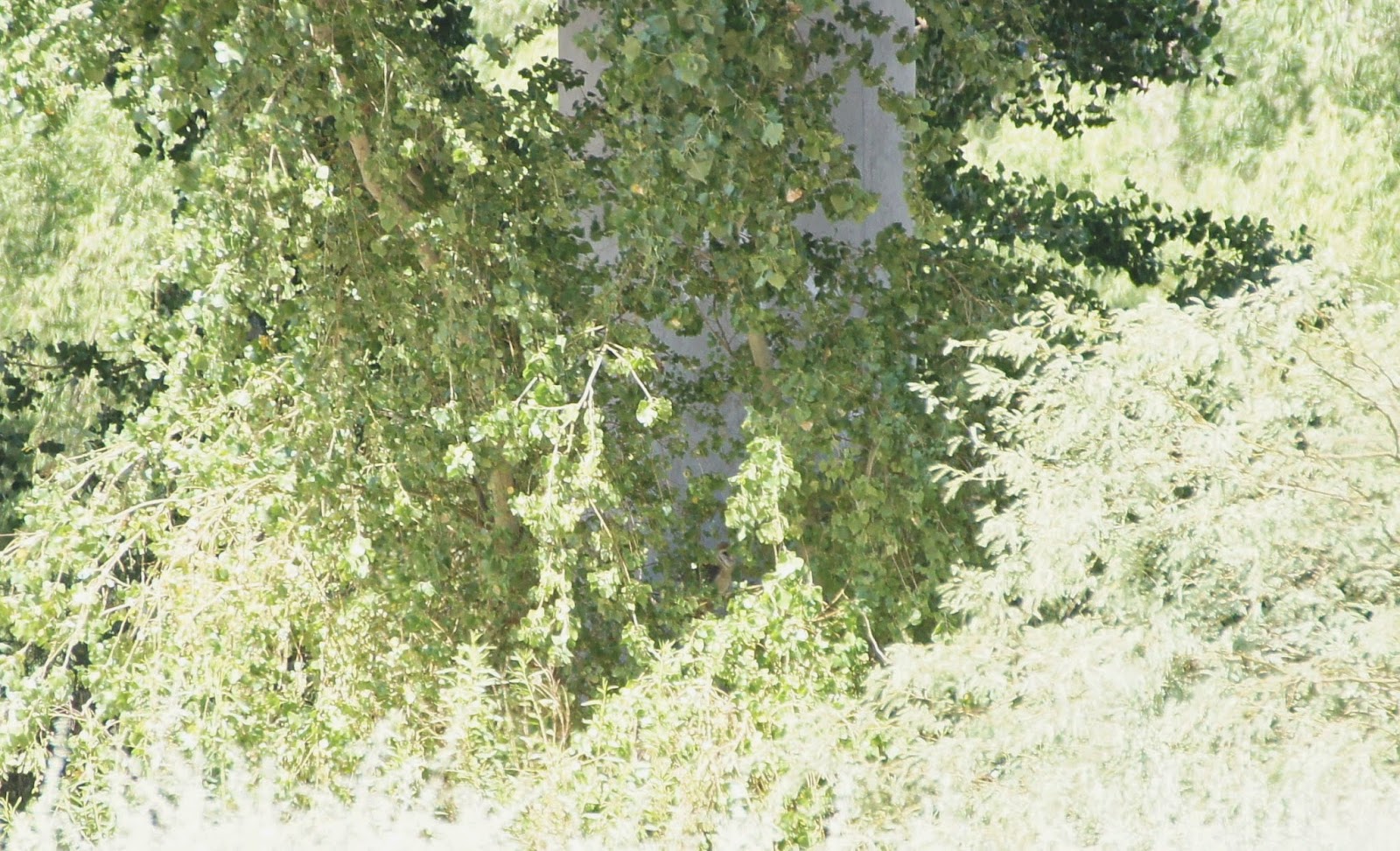 Posted by Tommy DeBardeleben at 2:42 PM

So God created the great creatures of the sea and every living thing with which the water teems and that moves about in it, according to their kinds, and every winged bird according to its kind. And God saw that it was good.