Yesterday on March 30th, 2013, Dominic Sherony and I ventured north to Flagstaff to explore the areas of Mormon Lake and Lake Mary.  It was an amazing day of birding, and Dominic and I had plenty of good highlights.  The highlights included many of the previously reported birds in the area, as well as several unexpected surprises.  We spent about seven hours in the area, and it was overcast and cloudy conditions during the entire day.  Any outing to this beautiful and scenic area is always awesome. 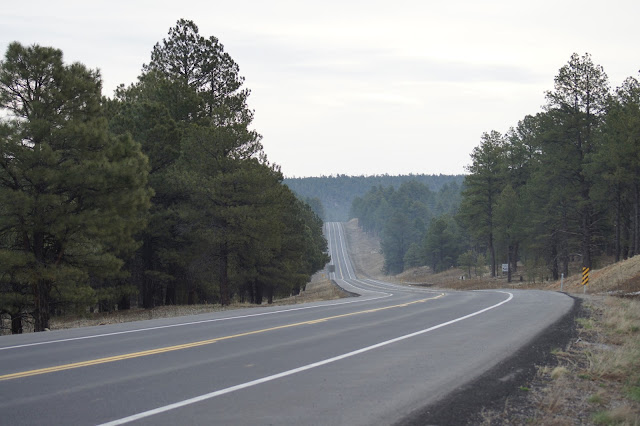 Our first birding stop came along Lake Mary Road before we reached Upper and Lower Lake Mary.  A perched accipiter caught our attention, and when we turned around to study it, it turned out to be an adult COOPER'S HAWK.  RED CROSSBILLS were singing nearby at this spot we pulled over alongside the road.  PYGMY NUTHATCHES, STELLER'S JAYS, and WESTERN BLUEBIRDS were also nearby.

Dominic getting photo's of the Coop 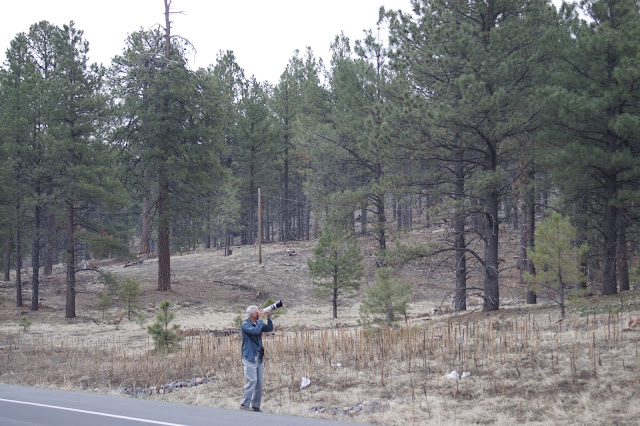 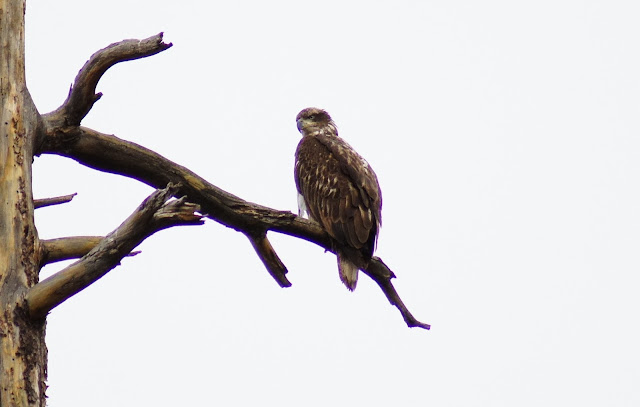 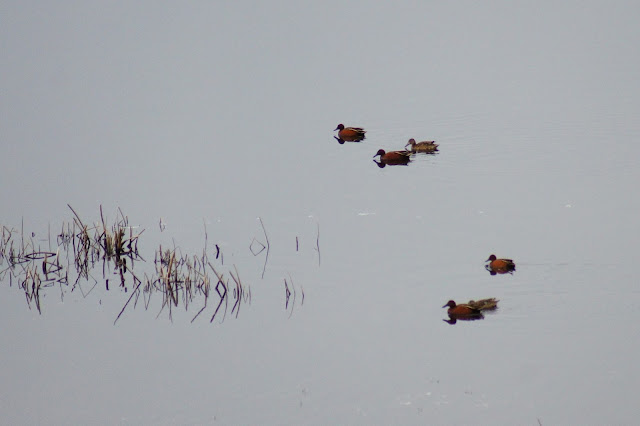 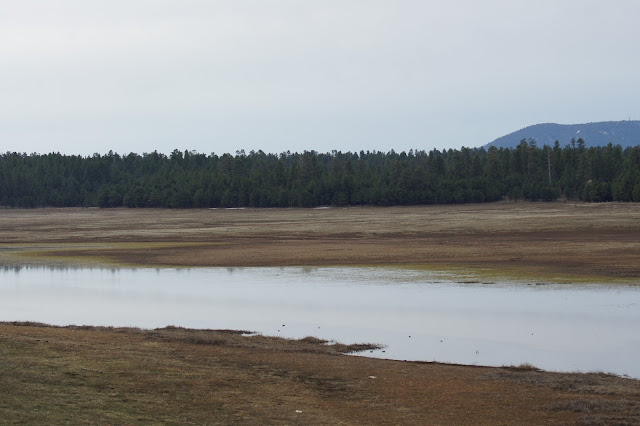 The real fun then began at the Mormon Lake Overlook.  There is a lot of water in the lake right now from snow melt, and it's a perfect bird sanctuary right now.  When we pulled up to the Overlook, we had a nice male NORTHERN HARRIER cruising over the grasslands.  As others have reported, waterbirds have been abundant from this overlook.  A nice surprise we had was an amazing flock of 70+ AMERICAN WHITE PELICANS in the middle of the lake.  I counted at least 70 birds when I scanned through the scope, but there were definetely a few more.  The flock of pelicans were huddled in together very close.  Another great highlight for us was a flock of FRANKLIN'S GULLS.  It's always nice to see this good-looking gull, and it was a state bird for Dominic!  A few RING-BILLED GULLS were also present.  The abundant waterfowl on the lake included CANADA GOOSE, RING-NECKED DUCK, LESSER SCAUP, CANVASBACK, REDHEAD, BUFFLEHEAD, RUDDY DUCK, NORTHERN SHOVELER, NORTHERN PINTAIL, GREEN-WINGED and CINNAMON TEAL, and MALLARD.  Songbirds around the lake included both WESTERN and EASTERN MEADOWLARKS, COMMON RAVEN and AMERICAN CROW, and VESPER SPARROW.  We weren't seeing the Rough-legged Hawk so we decided to try for it a few hours later.  As we were about to leave, I spied a shrike perched on top of a juniper tree knowing that a Northern Shrike has been here in recent winters.  I quickly got the scope on the bird and saw it was indeed a NORTHERN SHRIKE!  This bird was an adult and had a thin mask that was well below the eye, had a longer bill with a noticeable "hook", was a lighter gray color than Loggerhead Shrike, and it had barring on it's chest.  After the bird gave us good views, it disappeared on us and we didn't get a photograph of it.  This was a life bird for me, and a state bird for Dominic!  There has been a Northern Shrike at the Overlook in previous winters, perhaps this is the same bird.  Deciding we would come back to attempt another shot at the shrike and Rough-legged Hawk, we decided to head down to the Mormon Lake Lodge.   We then had another interruption and great surprise, as a juvenile GOLDEN EAGLE flew across the grassland on the north side of Lake Mary Road (across from the lookout) and perched on a juniper.  Dominic and I both got incredible scope views of the bird, but it was too far away for photos.  We both have never seen a Golden Eagle well before other than horrible "ridgeline" views, so this was a huge deal for both of us. 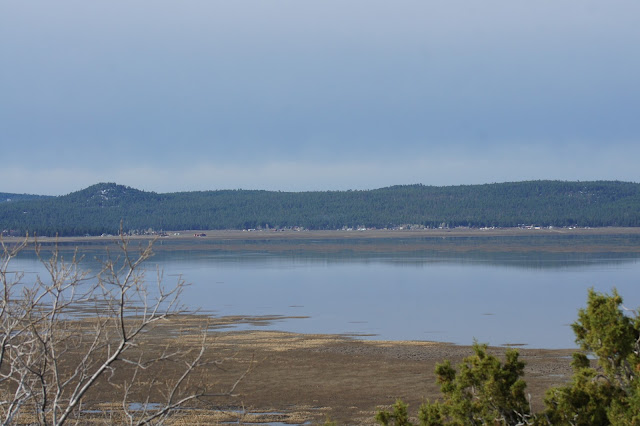 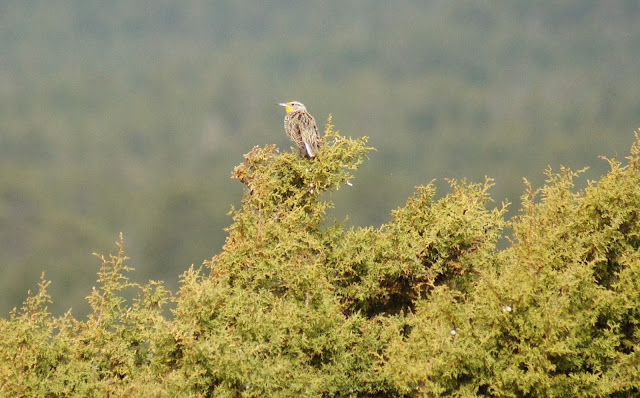 The Golden Eagle in the distance 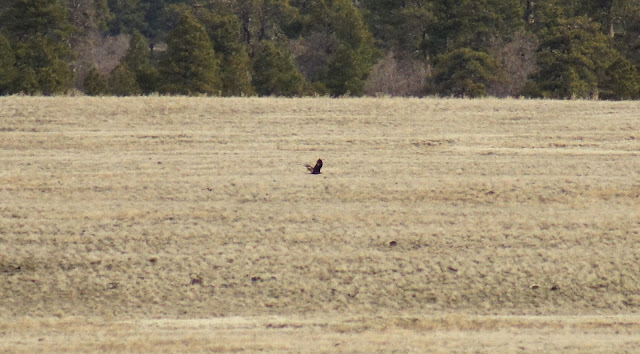 Up next was Mormon Lake Lodge and the adjacent RV Trailer Park (accessed on Mormon Lake Road) to look for the Evening Grosbeaks and other goodies others have seen.  As soon as we got out of the vehicle, we heard plenty of EVENING GROSBEAKS calling loudly in the area.  Over the course of the next two hours, we walking around this area looking at the Grosbeaks and other cool birds.  This was also a state bird for Dominic, his third of the day.  Both male and female Evening Grosbeaks were very viewable during this time.  At first they stayed high in the trees and weren't as easy to view, and in the latter hour of our time in the area, they feed and drank water from the ground at close range.  Fellow birders Moe and Carrie Bell also enjoyed the Grosbeaks with us for awhile.  Also in this area were plenty of RED CROSSBILLS, who were also pretty easy to find.  In a few dead snags on the south side of the road were a few LEWIS'S WOODPECKERS.  This woodpecker is a favorite of mine that I don't see enough of.  Other woodpeckers were numerous too, and were represented by a few RED-NAPED SAPSUCKERS, a HAIRY WOODPECKER, and a few ACORN WOODPECKERS.  Other birds in the area were WESTERN BLUEBIRD, VIOLET-GREEN SWALLOWS, WHITE-BREASTED and PYGMY NUTHATCHES, DARK-EYED JUNCOS, CHIPPING SPARROWS, and a female MOUNTAIN BLUEBIRD in the grassy areas nearby the Lodge.  We headed down to the fire station after the Lodge (shortly east of the Lodge) and at the pond there we had the continuing HOODED MERGANSERS, BUFFLEHEADS, and COMMON MERGANSERS. 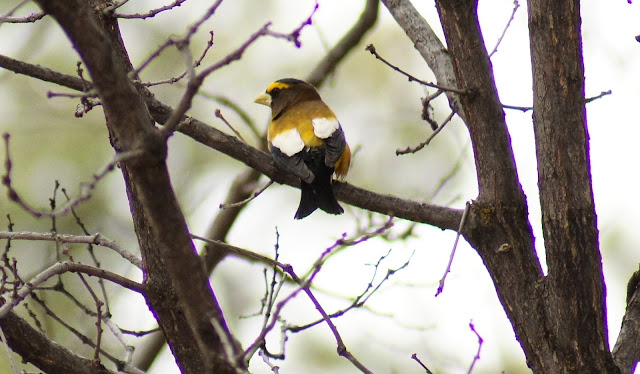 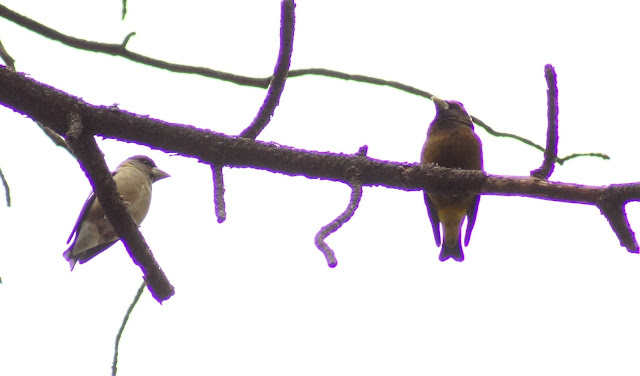 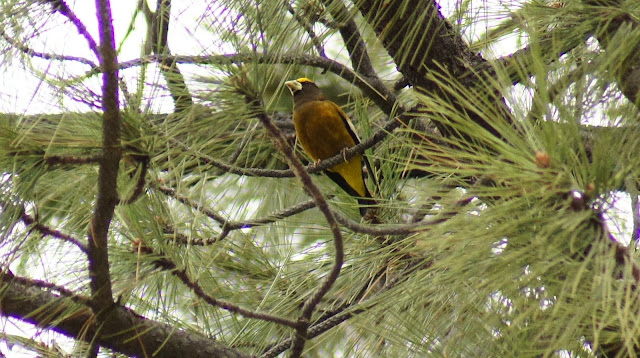 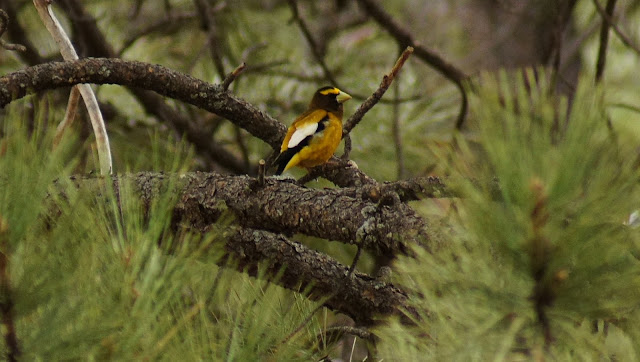 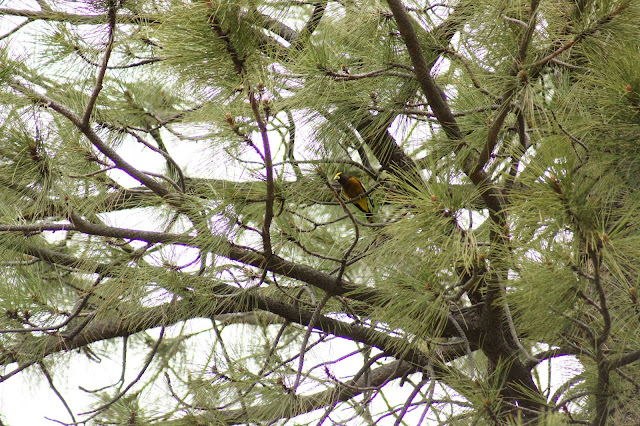 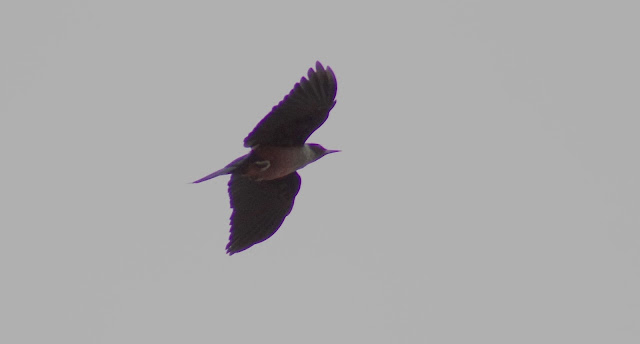 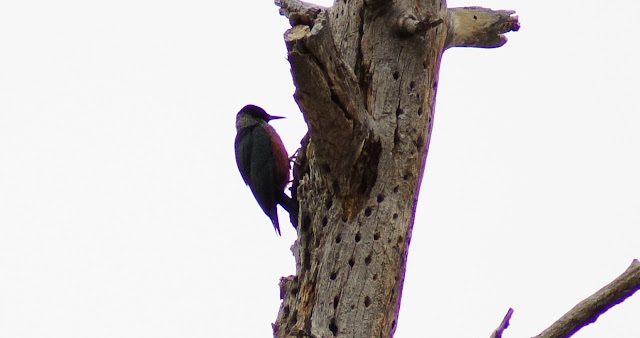 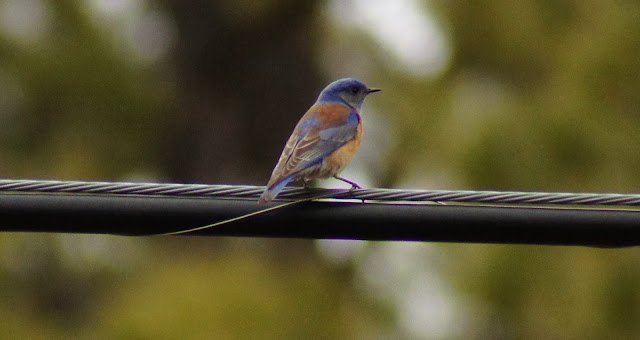 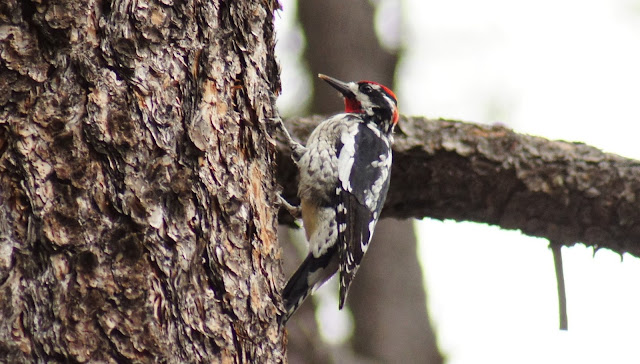 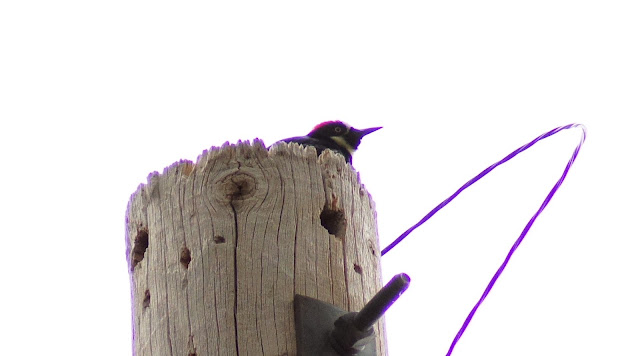 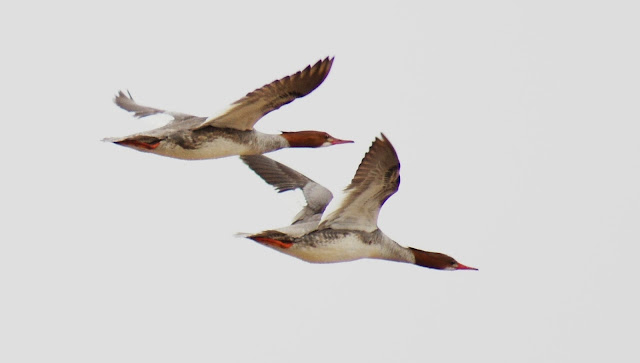 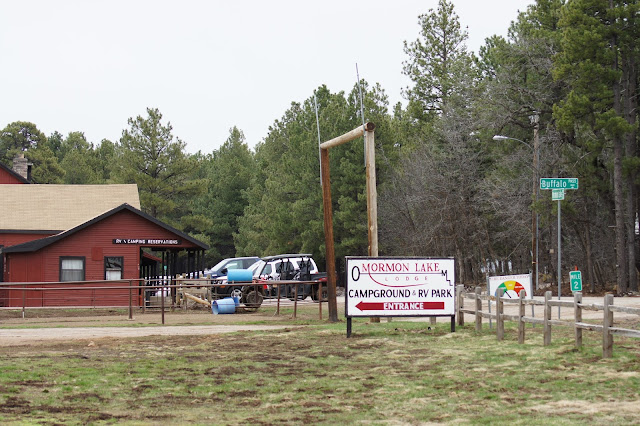 After birding the area of the Lodge, we headed back up to the Mormon Lake Overlook hoping for the hawk and another view of the Northern Shrike.  As we drove up, we saw two hovering hawks, and one of them was the ROUGH-LEGGED HAWK.  It was close to the road as we spied it, and over the next thirty minutes I ran back and fourth along the bluff trying to get close looks at the bird.  This was only my second ever Rough-legged Hawk, and I think they are AWESOME!  I managed to get fairly close to it, and get several decent photos of it.  Several RED-TAILED HAWKS and young BALD EAGLES flew around also, in which the wind had picked up, making the raptor viewing party a nice one (it wasn't windy at all on our first stop).  We spent more time looking for the shrike without luck, thinking this go around was going to be a Shrike-out.  Ironically, as we pulled out from the Overlook and started to head west again to Lake Mary, the NORTHERN SHRIKE flew across the street right in front of the vehicle!  A quick u-turn and ten minutes later, I was in front of the shrike after following it down the bluff a short distance.  I got a few good pictures off of the bird and I was very thankful to get pictures!  Both times that Dominic and I saw the shrike, it mainly stayed just west of the Overlook.  It would be at the level of the Overlook at times and other times would perch on trees and bushes on the bluffs below the overlook.  Certainly a cool bird to see!  Dominic and I also discussed that this area of the Mormon Lake Overlook is very "tundra-like", and is very similar to actually being in the Rough-legged Hawk and Northern Shrikes regular habitats.  Seeing these birds here with the snow-covered San Francisco Peaks in the background will stick with my memory for a long time coming. 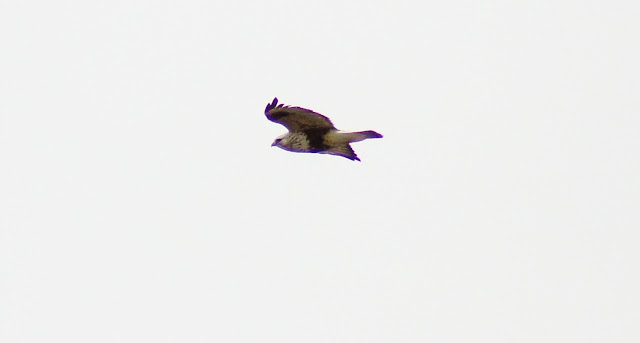 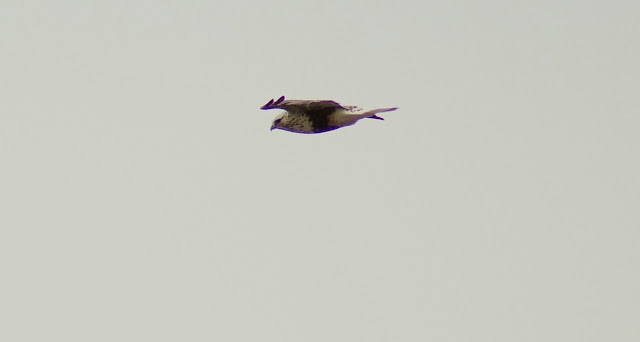 Northern Shrike (Lifebird and # 401 for Arizona!) 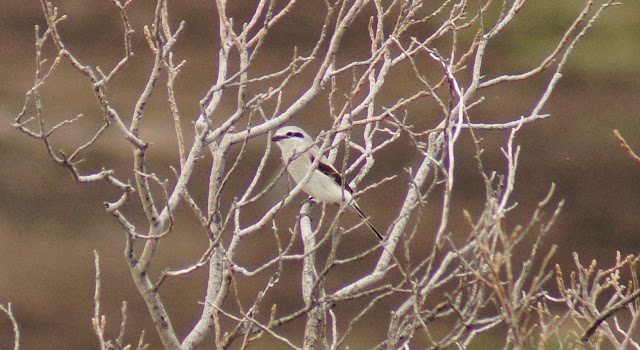 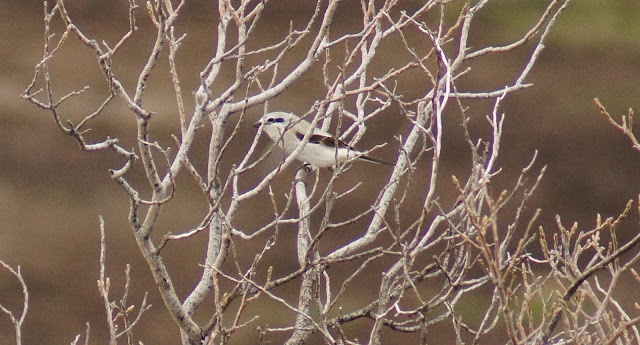 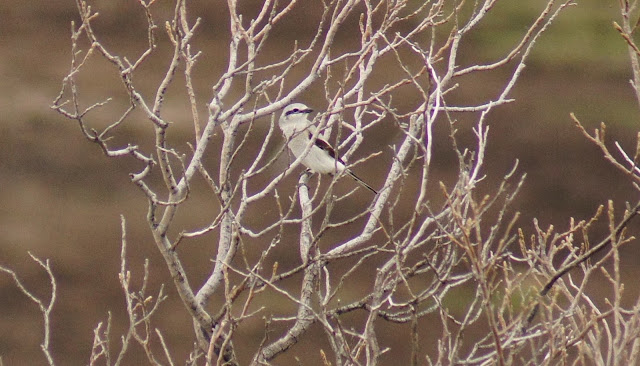 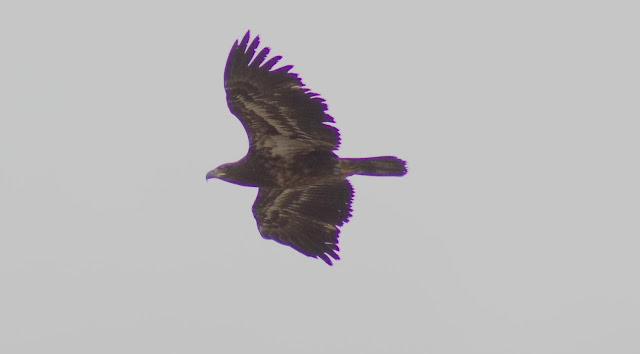 The "tundra" at Mormon Lake 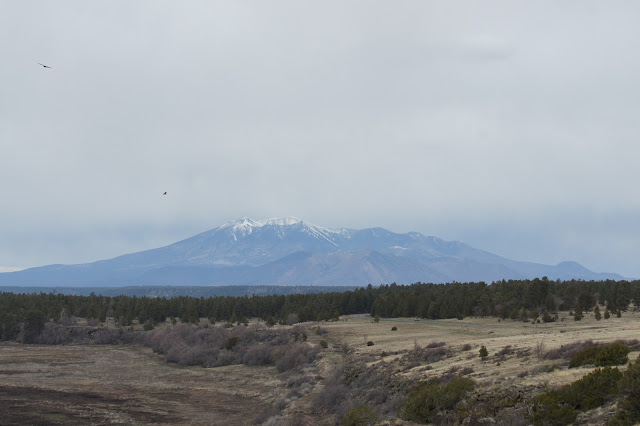 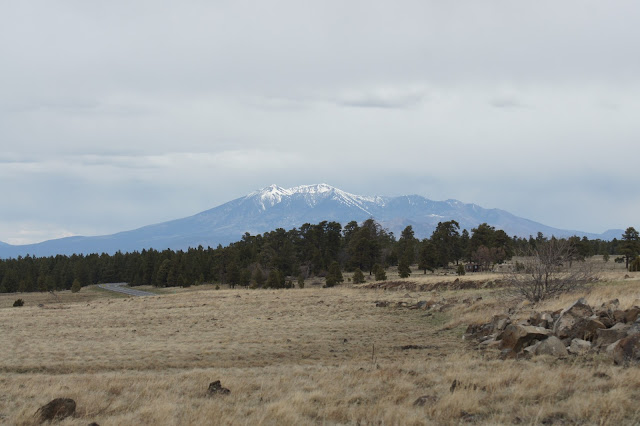 On the way back we birding the first mile of the road to the nearby Marshall Lake (adjacent to Upper Lake Mary on the north side of Lake Mary Road).  Highlights here was a nice mixed group of birds, which included AMERICAN ROBINS, PYGMY and WHITE-BREASTED NUTHATCHES, MOUNTAIN CHICKADEES, WESTERN BLUEBIRDS, and a singing TOWNSEND'S SOLITAIRE.  Coming back down the road we closed our birding day out on a good note as three PINYON JAYS landed in a pine alongside the road.  They quickly flew off and gave their distinctive loud and then descending call. 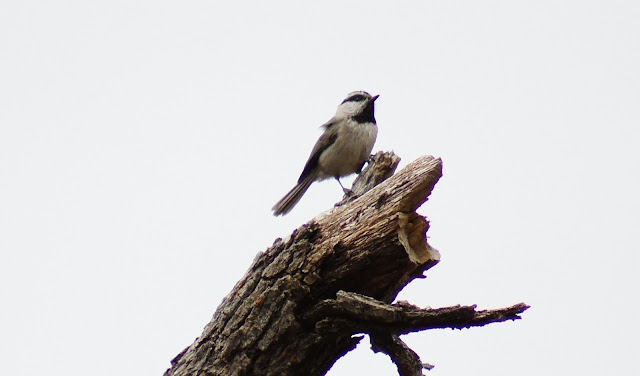 I can't say enough about how much I enjoyed birding this beautiful and spectacular area.  Hopefully I'll be able to bird Flagstaff in the near future, the birding is excellent! I also want to thank Charlie Babbitt and everyone else who has reported the awesome birds up there!

Posted by Tommy DeBardeleben at 3:18 PM

So God created the great creatures of the sea and every living thing with which the water teems and that moves about in it, according to their kinds, and every winged bird according to its kind. And God saw that it was good.